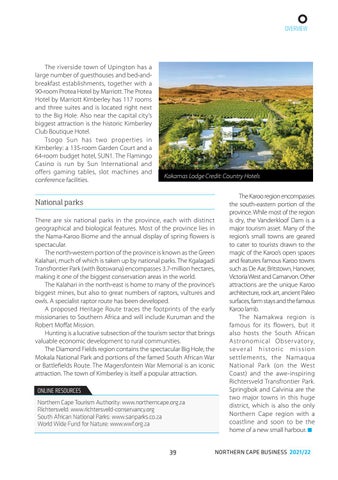 The riverside town of Upington has a large number of guesthouses and bed-andbreakfast establishments, together with a 90-room Protea Hotel by Marriott. The Protea Hotel by Marriott Kimberley has 117 rooms and three suites and is located right next to the Big Hole. Also near the capital city’s biggest attraction is the historic Kimberley Club Boutique Hotel. Tsogo Sun has two properties in Kimberley: a 135-room Garden Court and a 64-room budget hotel, SUN1. The Flamingo Casino is run by Sun International and offers gaming tables, slot machines and conference facilities.

National parks There are six national parks in the province, each with distinct geographical and biological features. Most of the province lies in the Nama-Karoo Biome and the annual display of spring flowers is spectacular. The north-western portion of the province is known as the Green Kalahari, much of which is taken up by national parks. The Kgalagadi Transfrontier Park (with Botswana) encompasses 3.7-million hectares, making it one of the biggest conservation areas in the world. The Kalahari in the north-east is home to many of the province’s biggest mines, but also to great numbers of raptors, vultures and owls. A specialist raptor route has been developed. A proposed Heritage Route traces the footprints of the early missionaries to Southern Africa and will include Kuruman and the Robert Moffat Mission. Hunting is a lucrative subsection of the tourism sector that brings valuable economic development to rural communities. The Diamond Fields region contains the spectacular Big Hole, the Mokala National Park and portions of the famed South African War or Battlefields Route. The Magersfontein War Memorial is an iconic attraction. The town of Kimberley is itself a popular attraction.

The Karoo region encompasses the south-eastern portion of the province. While most of the region is dry, the Vanderkloof Dam is a major tourism asset. Many of the region’s small towns are geared to cater to tourists drawn to the magic of the Karoo’s open spaces and features famous Karoo towns such as De Aar, Britstown, Hanover, Victoria West and Carnarvon. Other attractions are the unique Karoo architecture, rock art, ancient Paleo surfaces, farm stays and the famous Karoo lamb. The Namakwa region is famous for its flowers, but it also hosts the South African Astronomical Obser vator y, several historic mission settlements, the Namaqua National Park (on the West Coast) and the awe-inspiring Richtersveld Transfrontier Park. Springbok and Calvinia are the two major towns in this huge district, which is also the only Northern Cape region with a coastline and soon to be the home of a new small harbour. ■ NORTHERN CAPE BUSINESS 2021/22