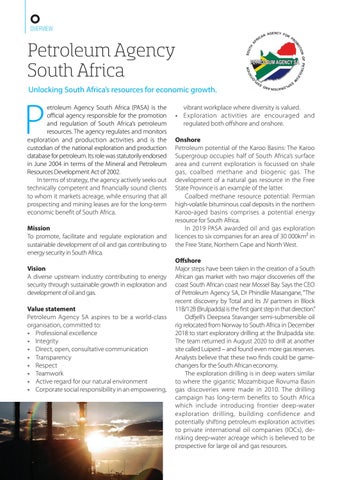 etroleum Agency South Africa (PASA) is the official agency responsible for the promotion and regulation of South Africa’s petroleum resources. The agency regulates and monitors exploration and production activities and is the custodian of the national exploration and production database for petroleum. Its role was statutorily endorsed in June 2004 in terms of the Mineral and Petroleum Resources Development Act of 2002. In terms of strategy, the agency actively seeks out technically competent and financially sound clients to whom it markets acreage, while ensuring that all prospecting and mining leases are for the long-term economic benefit of South Africa. Mission To promote, facilitate and regulate exploration and sustainable development of oil and gas contributing to energy security in South Africa. Vision A diverse upstream industry contributing to energy security through sustainable growth in exploration and development of oil and gas. Value statement Petroleum Agency SA aspires to be a world-class organisation, committed to: • Professional excellence • Integrity • Direct, open, consultative communication • Transparency • Respect • Teamwork • Active regard for our natural environment • Corporate social responsibility in an empowering,

vibrant workplace where diversity is valued. Exploration activities are encouraged and regulated both offshore and onshore.

Onshore Petroleum potential of the Karoo Basins: The Karoo Supergroup occupies half of South Africa’s surface area and current exploration is focussed on shale gas, coalbed methane and biogenic gas. The development of a natural gas resource in the Free State Province is an example of the latter. Coalbed methane resource potential: Permian high-volatile bituminous coal deposits in the northern Karoo-aged basins comprises a potential energy resource for South Africa. In 2019 PASA awarded oil and gas exploration licences to six companies for an area of 30 000km2 in the Free State, Northern Cape and North West. Offshore Major steps have been taken in the creation of a South African gas market with two major discoveries off the coast South African coast near Mossel Bay. Says the CEO of Petroleum Agency SA, Dr Phindile Masangane, “The recent discovery by Total and its JV partners in Block 11B/12B (Brulpadda) is the first giant step in that direction.” Odfjell’s Deepsea Stavanger semi-submersible oil rig relocated from Norway to South Africa in December 2018 to start exploratory drilling at the Brulpadda site. The team returned in August 2020 to drill at another site called Luiperd – and found even more gas reserves. Analysts believe that these two finds could be gamechangers for the South African economy. The exploration drilling is in deep waters similar to where the gigantic Mozambique Rovuma Basin gas discoveries were made in 2010. The drilling campaign has long-term benefits to South Africa which include introducing frontier deep-water exploration drilling, building confidence and potentially shifting petroleum exploration activities to private international oil companies (IOCs), derisking deep-water acreage which is believed to be prospective for large oil and gas resources.