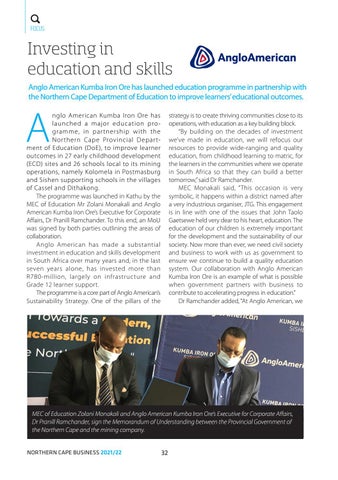 nglo American Kumba Iron Ore has launched a major education programme, in par tnership with the Nor thern Cape Provincial Depar tment of Education (DoE), to improve learner outcomes in 27 early childhood development (ECD) sites and 26 schools local to its mining operations, namely Kolomela in Postmasburg and Sishen supporting schools in the villages of Cassel and Dithakong. The programme was launched in Kathu by the MEC of Education Mr Zolani Monakali and Anglo American Kumba Iron Ore’s Executive for Corporate Affairs, Dr Pranill Ramchander. To this end, an MoU was signed by both parties outlining the areas of collaboration. Anglo American has made a substantial investment in education and skills development in South Africa over many years and, in the last seven years alone, has invested more than R780-million, largely on infrastructure and Grade 12 learner support. The programme is a core part of Anglo American’s Sustainability Strategy. One of the pillars of the

strategy is to create thriving communities close to its operations, with education as a key building block. “By building on the decades of investment we’ve made in education, we will refocus our resources to provide wide-ranging and quality education, from childhood learning to matric, for the learners in the communities where we operate in South Africa so that they can build a better tomorrow,” said Dr Ramchander. MEC Monakali said, “This occasion is very symbolic, it happens within a district named after a very industrious organiser, JTG. This engagement is in line with one of the issues that John Taolo Gaetsewe held very dear to his heart, education. The education of our children is extremely important for the development and the sustainability of our society. Now more than ever, we need civil society and business to work with us as government to ensure we continue to build a quality education system. Our collaboration with Anglo American Kumba Iron Ore is an example of what is possible when government partners with business to contribute to accelerating progress in education.” Dr Ramchander added, “At Anglo American, we