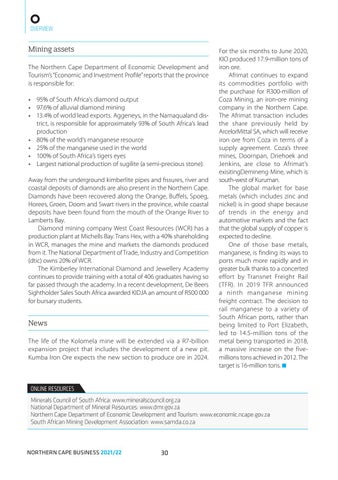 Mining assets The Northern Cape Department of Economic Development and Tourism’s “Economic and Investment Profile” reports that the province is responsible for: • • •

Away from the underground kimberlite pipes and fissures, river and coastal deposits of diamonds are also present in the Northern Cape. Diamonds have been recovered along the Orange, Buffels, Spoeg, Horees, Groen, Doom and Swart rivers in the province, while coastal deposits have been found from the mouth of the Orange River to Lamberts Bay. Diamond mining company West Coast Resources (WCR) has a production plant at Michells Bay. Trans Hex, with a 40% shareholding in WCR, manages the mine and markets the diamonds produced from it. The National Department of Trade, Industry and Competition (dtic) owns 20% of WCR. The Kimberley International Diamond and Jewellery Academy continues to provide training with a total of 406 graduates having so far passed through the academy. In a recent development, De Beers Sightholder Sales South Africa awarded KIDJA an amount of R500 000 for bursary students.

News The life of the Kolomela mine will be extended via a R7-billion expansion project that includes the development of a new pit. Kumba Iron Ore expects the new section to produce ore in 2024.

For the six months to June 2020, KIO produced 17.9-million tons of iron ore. Afrimat continues to expand its commodities portfolio with the purchase for R300-million of Coza Mining, an iron-ore mining company in the Northern Cape. The Afrimat transaction includes the share previously held by ArcelorMittal SA, which will receive iron ore from Coza in terms of a supply agreement. Coza’s three mines, Doornpan, Driehoek and Jenkins, are close to Afrimat’s exisitingDemineng Mine, which is south-west of Kuruman. The global market for base metals (which includes zinc and nickel) is in good shape because of trends in the energy and automotive markets and the fact that the global supply of copper is expected to decline. One of those base metals, manganese, is finding its ways to ports much more rapidly and in greater bulk thanks to a concerted effort by Transnet Freight Rail (TFR). In 2019 TFR announced a ninth manganese mining freight contract. The decision to rail manganese to a variety of South African ports, rather than being limited to Port Elizabeth, led to 14.5-million tons of the metal being transported in 2018, a massive increase on the fivemillions tons achieved in 2012. The target is 16-million tons. ■