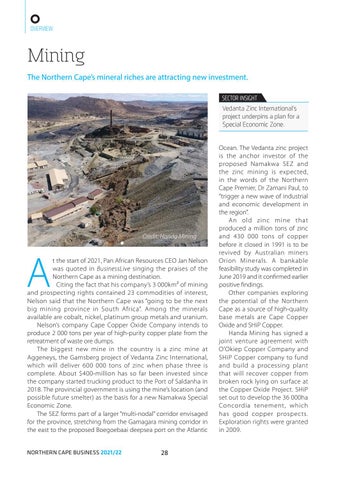 t the start of 2021, Pan African Resources CEO Jan Nelson was quoted in BusinessLive singing the praises of the Northern Cape as a mining destination. Citing the fact that his company’s 3 000km² of mining and prospecting rights contained 23 commodities of interest, Nelson said that the Northern Cape was “going to be the next big mining province in South Africa”. Among the minerals available are cobalt, nickel, platinum group metals and uranium. Nelson’s company Cape Copper Oxide Company intends to produce 2 000 tons per year of high-purity copper plate from the retreatment of waste ore dumps. The biggest new mine in the country is a zinc mine at Aggeneys, the Gamsberg project of Vedanta Zinc International, which will deliver 600 000 tons of zinc when phase three is complete. About $400-million has so far been invested since the company started trucking product to the Port of Saldanha in 2018. The provincial government is using the mine’s location (and possible future smelter) as the basis for a new Namakwa Special Economic Zone. The SEZ forms part of a larger “multi-nodal” corridor envisaged for the province, stretching from the Gamagara mining corridor in the east to the proposed Boegoebaai deepsea port on the Atlantic

Ocean. The Vedanta zinc project is the anchor investor of the proposed Namakwa SEZ and the zinc mining is expected, in the words of the Northern Cape Premier, Dr Zamani Paul, to “trigger a new wave of industrial and economic development in the region”. An old zinc mine that produced a million tons of zinc and 430 000 tons of copper before it closed in 1991 is to be revived by Australian miners Orion Minerals. A bankable feasibility study was completed in June 2019 and it confirmed earlier positive findings. Other companies exploring the potential of the Northern Cape as a source of high-quality base metals are Cape Copper Oxide and SHiP Copper. Handa Mining has signed a joint venture agreement with O’Okiep Copper Company and SHiP Copper company to fund and build a processing plant that will recover copper from broken rock lying on surface at the Copper Oxide Project. SHiP set out to develop the 36 000ha Concordia tenement, which has good copper prospects. Exploration rights were granted in 2009.