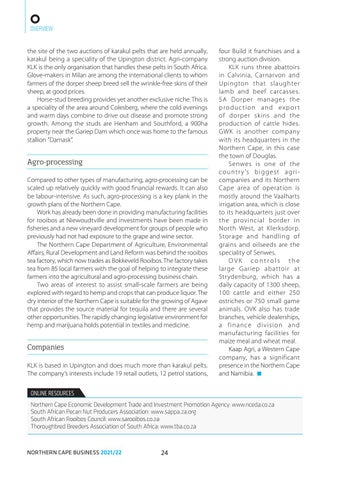 OVERVIEW the site of the two auctions of karakul pelts that are held annually, karakul being a speciality of the Upington district. Agri-company KLK is the only organisation that handles these pelts in South Africa. Glove-makers in Milan are among the international clients to whom farmers of the dorper sheep breed sell the wrinkle-free skins of their sheep, at good prices. Horse-stud breeding provides yet another exclusive niche. This is a speciality of the area around Colesberg, where the cold evenings and warm days combine to drive out disease and promote strong growth. Among the studs are Henham and Southford, a 900ha property near the Gariep Dam which once was home to the famous stallion ”Damask”.

Agro-processing Compared to other types of manufacturing, agro-processing can be scaled up relatively quickly with good financial rewards. It can also be labour-intensive. As such, agro-processing is a key plank in the growth plans of the Northern Cape. Work has already been done in providing manufacturing facilities for rooibos at Niewoudtville and investments have been made in fisheries and a new vineyard development for groups of people who previously had not had exposure to the grape and wine sector. The Northern Cape Department of Agriculture, Environmental Affairs, Rural Development and Land Reform was behind the rooibos tea factory, which now trades as Bokkeveld Rooibos. The factory takes tea from 85 local farmers with the goal of helping to integrate these farmers into the agricultural and agro-processing business chain. Two areas of interest to assist small-scale farmers are being explored with regard to hemp and crops that can produce liquor. The dry interior of the Northern Cape is suitable for the growing of Agave that provides the source material for tequila and there are several other opportunities. The rapidly changing legislative environment for hemp and marijuana holds potential in textiles and medicine.

Companies KLK is based in Upington and does much more than karakul pelts. The company’s interests include 19 retail outlets, 12 petrol stations,

four Build it franchises and a strong auction division. KLK runs three abattoirs in Calvinia, Carnarvon and Upington that slaughter lamb and beef carcasses. SA Dorper manages the p ro d u c t i o n a n d e x p o r t of dorper sk ins and the production of cattle hides. GWK is another company with its headquarters in the Northern Cape, in this case the town of Douglas. Senwes is one of the c o u n t r y ’s b i g g e s t a gr i companies and its Northern Cape area of operation is mostly around the Vaalharts irrigation area, which is close to its headquarters just over the provincial border in North West, at Klerksdorp. Storage and handling of grains and oilseeds are the speciality of Senwes. OVK controls the large Gariep abattoir at Strydenburg, which has a daily capacity of 1300 sheep, 100 cattle and either 250 ostriches or 750 small game animals. OVK also has trade branches, vehicle dealerships, a finance division and manufacturing facilities for maize meal and wheat meal. Kaap Agri, a Western Cape company, has a significant presence in the Northern Cape and Namibia. ■