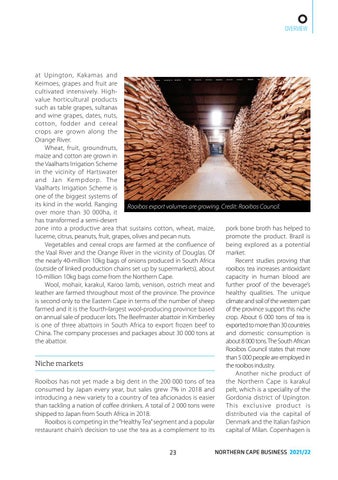 at Upington, Kakamas and Keimoes, grapes and fruit are cultivated intensively. Highvalue horticultural products such as table grapes, sultanas and wine grapes, dates, nuts, cotton, fodder and cereal crops are grown along the Orange River. Wheat, fruit, groundnuts, maize and cotton are grown in the Vaalharts Irrigation Scheme in the vicinity of Hartswater and Jan Kempdorp. The Vaalharts Irrigation Scheme is one of the biggest systems of its kind in the world. Ranging Rooibos export volumes are growing. Credit: Rooibos Council. over more than 30 000ha, it has transformed a semi-desert pork bone broth has helped to zone into a productive area that sustains cotton, wheat, maize, promote the product. Brazil is lucerne, citrus, peanuts, fruit, grapes, olives and pecan nuts. being explored as a potential Vegetables and cereal crops are farmed at the confluence of market. the Vaal River and the Orange River in the vicinity of Douglas. Of Recent studies proving that the nearly 40-million 10kg bags of onions produced in South Africa rooibos tea increases antioxidant (outside of linked production chains set up by supermarkets), about capacity in human blood are 10-million 10kg bags come from the Northern Cape. further proof of the beverage’s Wool, mohair, karakul, Karoo lamb, venison, ostrich meat and healthy qualities. The unique leather are farmed throughout most of the province. The province climate and soil of the western part is second only to the Eastern Cape in terms of the number of sheep of the province support this niche farmed and it is the fourth-largest wool-producing province based crop. About 6 000 tons of tea is on annual sale of producer lots. The Beefmaster abattoir in Kimberley exported to more than 30 countries is one of three abattoirs in South Africa to export frozen beef to and domestic consumption is China. The company processes and packages about 30 000 tons at about 8 000 tons. The South African the abattoir. Rooibos Council states that more than 5 000 people are employed in Niche markets the rooibos industry. Another niche product of the Northern Cape is karakul Rooibos has not yet made a big dent in the 200 000 tons of tea pelt, which is a speciality of the consumed by Japan every year, but sales grew 7% in 2018 and Gordonia district of Upington. introducing a new variety to a country of tea aficionados is easier This exclusive product is than tackling a nation of coffee drinkers. A total of 2 000 tons were distributed via the capital of shipped to Japan from South Africa in 2018. Denmark and the Italian fashion Rooibos is competing in the “Healthy Tea” segment and a popular capital of Milan. Copenhagen is restaurant chain’s decision to use the tea as a complement to its