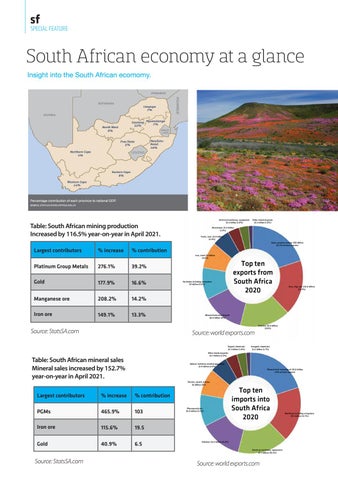 secured tens of thousands of new seats on direct

Trends flights to and from the city). Table: South African mining production

Companies are successfully trading into Africa. • Niche agricultural markets are booming with Good signs for the economy include: • Several provincial governments and investment macadamia nuts being the most successful. agencies are establishing trade relations and Pecan nuts have done well and wine and grape study programmes with BRICS countries. State exports to China are growing. Largest contributors % increase % contribution visits to and from China immediately before and • Private education at school and tertiary level is growing as a sector. after a major BRICS summit in 2018 gave an indication that Ramaphosa holds high hopes for • New banking licences have been issued and Platinum Group Metals 276.1%several more 39.2% are in the pipeline. increased trade with the biggest of the BRICS nations. Two-way trade between the countries in • New stock exchanges came on line in 2017 and more are expected. 2017 was worth $39.1-billion. South Africa wants Gold 177.9% • Investment16.6% in infrastructure (especially ICT and to grow tourist numbers from China. South Africa railways) is strong. Nedbank’s report on capital became the first country in the world to export expenditure in South Africa stated that the beef to China in 2017, to go with existing exports of iron ore, platinumore and fruit and wine. 208.2%29 large projects Manganese 14.2%announced in the first half • Tourists are visiting South Africa in record numof 2018 were valued at R63.9-billion (Financial bers (Cape Town’s Air Access programme has Mail). The renewable energy programme