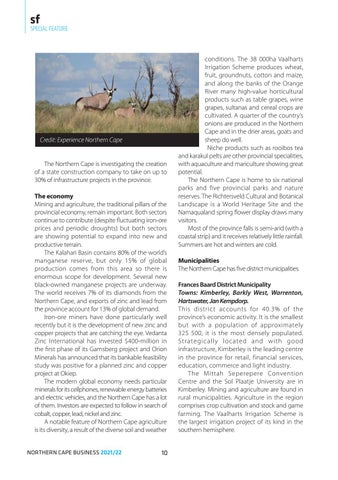 Credit: Experience Northern Cape The Northern Cape is investigating the creation of a state construction company to take on up to 30% of infrastructure projects in the province. The economy Mining and agriculture, the traditional pillars of the provincial economy, remain important. Both sectors continue to contribute (despite fluctuating iron-ore prices and periodic droughts) but both sectors are showing potential to expand into new and productive terrain. The Kalahari Basin contains 80% of the world’s manganese reserve, but only 15% of global production comes from this area so there is enormous scope for development. Several new black-owned manganese projects are underway. The world receives 7% of its diamonds from the Northern Cape, and exports of zinc and lead from the province account for 13% of global demand. Iron-ore miners have done particularly well recently but it is the development of new zinc and copper projects that are catching the eye. Vedanta Zinc International has invested $400-million in the first phase of its Gamsberg project and Orion Minerals has announced that its bankable feasibility study was positive for a planned zinc and copper project at Okiep. The modern global economy needs particular minerals for its cellphones, renewable energy batteries and electric vehicles, and the Northern Cape has a lot of them. Investors are expected to follow in search of cobalt, copper, lead, nickel and zinc. A notable feature of Northern Cape agriculture is its diversity, a result of the diverse soil and weather NORTHERN CAPE BUSINESS 2021/22

conditions. The 38 000ha Vaalharts Irrigation Scheme produces wheat, fruit, groundnuts, cotton and maize, and along the banks of the Orange River many high-value horticultural products such as table grapes, wine grapes, sultanas and cereal crops are cultivated. A quarter of the country’s onions are produced in the Northern Cape and in the drier areas, goats and sheep do well. Niche products such as rooibos tea and karakul pelts are other provincial specialities, with aquaculture and mariculture showing great potential. The Northern Cape is home to six national parks and five provincial parks and nature reserves. The Richtersveld Cultural and Botanical Landscape is a World Heritage Site and the Namaqualand spring flower display draws many visitors. Most of the province falls is semi-arid (with a coastal strip) and it receives relatively little rainfall. Summers are hot and winters are cold. Municipalities The Northern Cape has five district municipalities. Frances Baard District Municipality Towns: Kimberley, Barkly West, Warrenton, Hartswater, Jan Kempdorp. This district accounts for 40.3% of the province’s economic activity. It is the smallest but with a population of approximately 325 500, it is the most densely populated. Strategically located and with good infrastructure, Kimberley is the leading centre in the province for retail, financial services, education, commerce and light industry. The Mittah Seperepere Convention Centre and the Sol Plaatje University are in Kimberley. Mining and agriculture are found in rural municipalities. Agriculture in the region comprises crop cultivation and stock and game farming. The Vaalharts Irrigation Scheme is the largest irrigation project of its kind in the southern hemisphere.