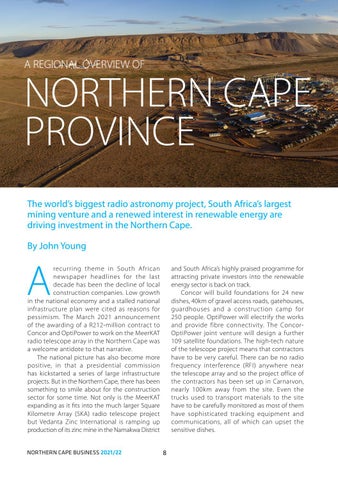 recurring theme in South African newspaper headlines for the last decade has been the decline of local construction companies. Low growth in the national economy and a stalled national infrastructure plan were cited as reasons for pessimism. The March 2021 announcement of the awarding of a R212-million contract to Concor and OptiPower to work on the MeerKAT radio telescope array in the Northern Cape was a welcome antidote to that narrative. The national picture has also become more positive, in that a presidential commission has kickstarted a series of large infrastructure projects. But in the Northern Cape, there has been something to smile about for the construction sector for some time. Not only is the MeerKAT expanding as it fits into the much larger Square Kilometre Array (SKA) radio telescope project but Vedanta Zinc International is ramping up production of its zinc mine in the Namakwa District

and South Africa’s highly praised programme for attracting private investors into the renewable energy sector is back on track. Concor will build foundations for 24 new dishes, 40km of gravel access roads, gatehouses, guardhouses and a construction camp for 250 people. OptiPower will electrify the works and provide fibre connectivity. The ConcorOptiPower joint venture will design a further 109 satellite foundations. The high-tech nature of the telescope project means that contractors have to be very careful. There can be no radio frequency interference (RFI) anywhere near the telescope array and so the project office of the contractors has been set up in Carnarvon, nearly 100km away from the site. Even the trucks used to transport materials to the site have to be carefully monitored as most of them have sophisticated tracking equipment and communications, all of which can upset the sensitive dishes.