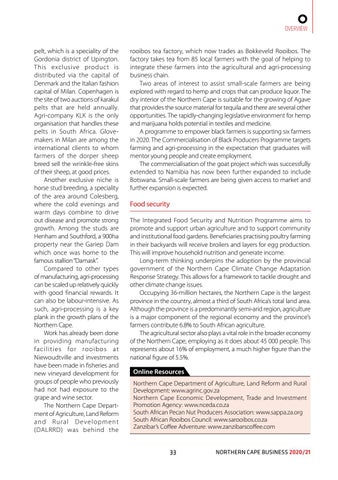 OVERVIEW pelt, which is a speciality of the Gordonia district of Upington. This exclusive product is distributed via the capital of Denmark and the Italian fashion capital of Milan. Copenhagen is the site of two auctions of karakul pelts that are held annually. Agri-company KLK is the only organisation that handles these pelts in South Africa. Glovemakers in Milan are among the international clients to whom farmers of the dorper sheep breed sell the wrinkle-free skins of their sheep, at good prices. Another exclusive niche is horse stud breeding, a speciality of the area around Colesberg, where the cold evenings and warm days combine to drive out disease and promote strong growth. Among the studs are Henham and Southford, a 900ha property near the Gariep Dam which once was home to the famous stallion “Damask”. Compared to other types of manufacturing, agri-processing can be scaled up relatively quickly with good financial rewards. It can also be labour-intensive. As such, agri-processing is a key plank in the growth plans of the Northern Cape. Work has already been done in providing manufacturing f a c i li t i e s fo r ro o i b os a t Niewoudtville and investments have been made in fisheries and new vineyard development for groups of people who previously had not had exposure to the grape and wine sector. The Northern Cape Department of Agriculture, Land Reform a n d R u r a l D e ve l o p m e n t (DALRRD) was behind the

rooibos tea factory, which now trades as Bokkeveld Rooibos. The factory takes tea from 85 local farmers with the goal of helping to integrate these farmers into the agricultural and agri-processing business chain. Two areas of interest to assist small-scale farmers are being explored with regard to hemp and crops that can produce liquor. The dry interior of the Northern Cape is suitable for the growing of Agave that provides the source material for tequila and there are several other opportunities. The rapidly-changing legislative environment for hemp and marijuana holds potential in textiles and medicine. A programme to empower black farmers is supporting six farmers in 2020. The Commercialisation of Black Producers Programme targets farming and agri-processing in the expectation that graduates will mentor young people and create employment. The commercialisation of the goat project which was successfully extended to Namibia has now been further expanded to include Botswana. Small-scale farmers are being given access to market and further expansion is expected.

Food security The Integrated Food Security and Nutrition Programme aims to promote and support urban agriculture and to support community and institutional food gardens. Beneficiaries practising poultry farming in their backyards will receive broilers and layers for egg production. This will improve household nutrition and generate income. Long-term thinking underpins the adoption by the provincial government of the Northern Cape Climate Change Adaptation Response Strategy. This allows for a framework to tackle drought and other climate change issues. Occupying 36-million hectares, the Northern Cape is the largest province in the country, almost a third of South Africa’s total land area. Although the province is a predominantly semi-arid region, agriculture is a major component of the regional economy and the province’s farmers contribute 6.8% to South African agriculture. The agricultural sector also plays a vital role in the broader economy of the Northern Cape, employing as it does about 45 000 people. This represents about 16% of employment, a much higher figure than the national figure of 5.5%.