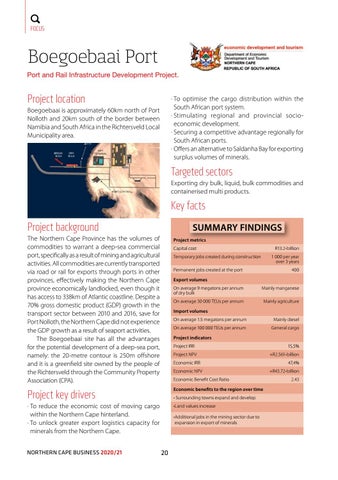 Promotion of Economic Growth a Development in the Northern Ca

FEL2 phase. Finalisation of FEL2 is planned for December 2018.

Boegoebaai is approximately 60km north of Port Nolloth and 20km south of the border between Namibia and South Africa in the Richtersveld Local Municipality area.

The Northern Cape Province has the volumes of commodities to Comment warrant a deep-sea commercial New volume from junior miners port, specifically as a result of mining and agricultural Lower cost logistic solution activities. All commodities are currently transported Closest port to mines Multi-purpose commodities, mining and low container volumes via road agricultural, or rail for exports through ports in other provinces, effectively making the Northern Cape province economically landlocked, even though it has access to 338km of Atlantic coastline. Despite a 70% gross domestic product (GDP) growth in the transport sector between 2010 and 2016, save for Port Nolloth, the Northern Cape did not experience the GDP growth as a result of seaport activities. The Boegoebaai site has all the advantages for the potential development of a deep-sea port, namely: the 20-metre contour is 250m offshore and it is a greenfield site owned by the people of the Richtersveld through the Community Property Association (CPA).

Export volumes On average 9 megatons per annum of dry bulk

Economic benefits to the region over time