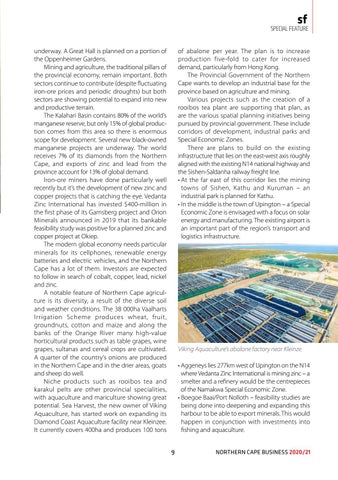 SPECIAL FEATURE of abalone per year. The plan is to increase production five-fold to cater for increased demand, particularly from Hong Kong. The Provincial Government of the Northern Cape wants to develop an industrial base for the province based on agriculture and mining. Various projects such as the creation of a rooibos tea plant are supporting that plan, as are the various spatial planning initiatives being pursued by provincial government. These include corridors of development, industrial parks and Special Economic Zones. There are plans to build on the existing infrastructure that lies on the east-west axis roughly aligned with the existing N14 national highway and the Sishen-Saldanha railway freight line. • At the far east of this corridor lies the mining towns of Sishen, Kathu and Kuruman – an industrial park is planned for Kathu. • In the middle is the town of Upington – a Special Economic Zone is envisaged with a focus on solar energy and manufacturing. The existing airport is an important part of the region’s transport and logistics infrastructure.

underway. A Great Hall is planned on a portion of the Oppenheimer Gardens. Mining and agriculture, the traditional pillars of the provincial economy, remain important. Both sectors continue to contribute (despite fluctuating iron-ore prices and periodic droughts) but both sectors are showing potential to expand into new and productive terrain. The Kalahari Basin contains 80% of the world’s manganese reserve, but only 15% of global production comes from this area so there is enormous scope for development. Several new black-owned manganese projects are underway. The world receives 7% of its diamonds from the Northern Cape, and exports of zinc and lead from the province account for 13% of global demand. Iron-ore miners have done particularly well recently but it’s the development of new zinc and copper projects that is catching the eye. Vedanta Zinc International has invested $400-million in the first phase of its Gamsberg project and Orion Minerals announced in 2019 that its bankable feasibility study was positive for a planned zinc and copper project at Okiep. The modern global economy needs particular minerals for its cellphones, renewable energy batteries and electric vehicles, and the Northern Cape has a lot of them. Investors are expected to follow in search of cobalt, copper, lead, nickel and zinc. A notable feature of Northern Cape agriculture is its diversity, a result of the diverse soil and weather conditions. The 38 000ha Vaalharts Irrigation Scheme produces wheat, fruit, groundnuts, cotton and maize and along the banks of the Orange River many high-value horticultural products such as table grapes, wine grapes, sultanas and cereal crops are cultivated. A quarter of the country’s onions are produced in the Northern Cape and in the drier areas, goats and sheep do well. Niche products such as rooibos tea and karakul pelts are other provincial specialities, with aquaculture and mariculture showing great potential. Sea Harvest, the new owner of Viking Aquaculture, has started work on expanding its Diamond Coast Aquaculture facility near Kleinzee. It currently covers 400ha and produces 100 tons

Viking Aquaculture’s abalone factory near Kleinze. • Aggeneys lies 277km west of Upington on the N14 where Vedanta Zinc International is mining zinc – a smelter and a refinery would be the centrepieces of the Namakwa Special Economic Zone. • Boegoe Baai/Port Nolloth – feasibility studies are being done into deepening and expanding this harbour to be able to export minerals. This would happen in conjunction with investments into fishing and aquaculture.