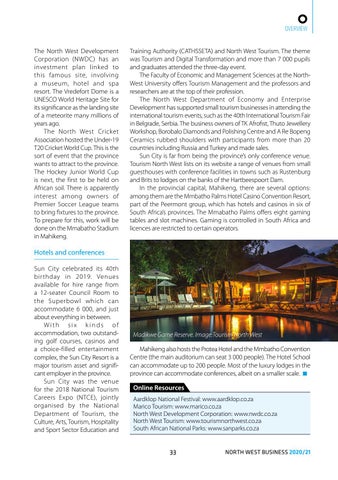 OVERVIEW The North West Development Corporation (NWDC) has an investment plan linked to this famous site, involving a museum, hotel and spa resort. The Vredefort Dome is a UNESCO World Heritage Site for its significance as the landing site of a meteorite many millions of years ago. The North West Cricket Association hosted the Under-19 T20 Cricket World Cup. This is the sort of event that the province wants to attract to the province. The Hockey Junior World Cup is next, the first to be held on African soil. There is apparently interest among owners of Premier Soccer League teams to bring fixtures to the province. To prepare for this, work will be done on the Mmabatho Stadium in Mahikeng.

Training Authority (CATHSSETA) and North West Tourism. The theme was Tourism and Digital Transformation and more than 7 000 pupils and graduates attended the three-day event. The Faculty of Economic and Management Sciences at the NorthWest University offers Tourism Management and the professors and researchers are at the top of their profession. The North West Department of Economy and Enterprise Development has supported small tourism businesses in attending the international tourism events, such as the 40th International Tourism Fair in Belgrade, Serbia. The business owners of TK Afrofist, Thuto Jewellery Workshop, Borobalo Diamonds and Polishing Centre and A Re Bopeng Ceramics rubbed shoulders with participants from more than 20 countries including Russia and Turkey and made sales. Sun City is far from being the province’s only conference venue. Tourism North West lists on its website a range of venues from small guesthouses with conference facilities in towns such as Rustenburg and Brits to lodges on the banks of the Hartbeespoort Dam. In the provincial capital, Mahikeng, there are several options: among them are the Mmbatho Palms Hotel Casino Convention Resort, part of the Peermont group, which has hotels and casinos in six of South Africa’s provinces. The Mmabatho Palms offers eight gaming tables and slot machines. Gaming is controlled in South Africa and licences are restricted to certain operators.

Hotels and conferences Sun City celebrated its 40th bir thday in 2019. Venues available for hire range from a 12-seater Council Room to the Superbowl which can accommodate 6 000, and just about everything in between. With six kinds of accommodation, two outstanding golf courses, casinos and a choice-filled entertainment complex, the Sun City Resort is a major tourism asset and significant employer in the province. Sun City was the venue for the 2018 National Tourism Careers Expo (NTCE), jointly organised by the National Department of Tourism, the Culture, Arts, Tourism, Hospitality and Sport Sector Education and

Madikwe Game Reserve. Image:Tourism North West Mahikeng also hosts the Protea Hotel and the Mmbatho Convention Centre (the main auditorium can seat 3 000 people). The Hotel School can accommodate up to 200 people. Most of the luxury lodges in the province can accommodate conferences, albeit on a smaller scale. ■