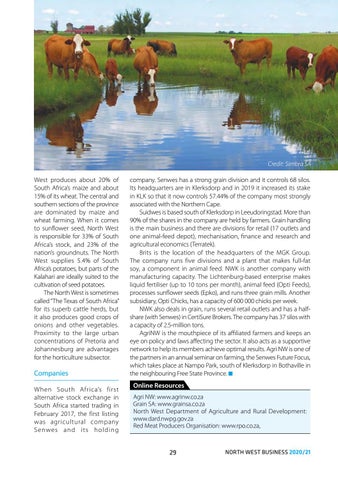 Credit: Simbra SA West produces about 20% of South Africa’s maize and about 15% of its wheat. The central and southern sections of the province are dominated by maize and wheat farming. When it comes to sunflower seed, North West is responsible for 33% of South Africa’s stock, and 23% of the nation’s groundnuts. The North West supplies 5.4% of South Africa’s potatoes, but parts of the Kalahari are ideally suited to the cultivation of seed potatoes. The North West is sometimes called “The Texas of South Africa” for its superb cattle herds, but it also produces good crops of onions and other vegetables. Proximity to the large urban concentrations of Pretoria and Johannesburg are advantages for the horticulture subsector.

company. Senwes has a strong grain division and it controls 68 silos. Its headquarters are in Klerksdorp and in 2019 it increased its stake in KLK so that it now controls 57.44% of the company most strongly associated with the Northern Cape. Suidwes is based south of Klerksdorp in Leeudoringstad. More than 90% of the shares in the company are held by farmers. Grain handling is the main business and there are divisions for retail (17 outlets and one animal-feed depot), mechanisation, finance and research and agricultural economics (Terratek). Brits is the location of the headquarters of the MGK Group. The company runs five divisions and a plant that makes full-fat soy, a component in animal feed. NWK is another company with manufacturing capacity. The Lichtenburg-based enterprise makes liquid fertiliser (up to 10 tons per month), animal feed (Opti Feeds), processes sunflower seeds (Epko), and runs three grain mills. Another subsidiary, Opti Chicks, has a capacity of 600 000 chicks per week. NWK also deals in grain, runs several retail outlets and has a halfshare (with Senwes) in CertiSure Brokers. The company has 37 silos with a capacity of 2.5-million tons. AgriNW is the mouthpiece of its affiliated farmers and keeps an eye on policy and laws affecting the sector. It also acts as a supportive network to help its members achieve optimal results. Agri NW is one of the partners in an annual seminar on farming, the Senwes Future Focus, which takes place at Nampo Park, south of Klerksdorp in Bothaville in the neighbouring Free State Province. ■