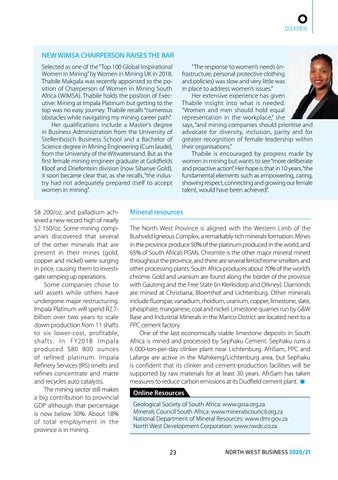 NEW WIMSA CHAIRPERSON RAISES THE BAR Selected as one of the “Top 100 Global Inspirational Women in Mining” by Women in Mining UK in 2018, Thabile Makgala was recently appointed to the position of Chairperson of Women in Mining South Africa (WiMSA). Thabile holds the position of Executive: Mining at Impala Platinum but getting to the top was no easy journey. Thabile recalls “numerous obstacles while navigating my mining career path”. Her qualifications include a Master’s degree in Business Administration from the University of Stellenbosch Business School and a Bachelor of Science degree in Mining Engineering (Cum laude), from the University of the Witwatersrand. But as the first female mining engineer graduate at Goldfields Kloof and Driefontein division (now Sibanye Gold), it soon became clear that, as she recalls, “the industry had not adequately prepared itself to accept women in mining”.

$8 200/oz, and palladium achieved a new record high of nearly $2 150/oz. Some mining companies discovered that several of the other minerals that are present in their mines (gold, copper and nickel) were surging in price, causing them to investigate ramping up operations. Some companies chose to sell assets while others have undergone major restructuring. Impala Platinum will spend R2.7billion over two years to scale down production from 11 shafts to six lower-cost, profitable, shafts. In FY2018 Impala produced 580 800 ounces of refined platinum. Impala Refinery Services (IRS) smelts and refines concentrate and matte and recycles auto catalysts. The mining sector still makes a big contribution to provincial GDP although that percentage is now below 30%. About 18% of total employment in the province is in mining.

“The response to women’s needs (infrastructure, personal protective clothing and policies) was slow and very little was in place to address women’s issues.” Her extensive experience has given Thabile insight into what is needed. “Women and men should hold equal representation in the workplace,” she says, “and mining companies should prioritise and advocate for diversity, inclusion, parity and for greater recognition of female leadership within their organisations.” Thabile is encouraged by progress made by women in mining but wants to see “more deliberate and proactive action”. Her hope is that in 10 years, “the fundamental elements such as empowering, caring, showing respect, connecting and growing our female talent, would have been achieved”.

Mineral resources The North West Province is aligned with the Western Limb of the Bushveld Igneous Complex, a remarkably rich minerals formation. Mines in the province produce 50% of the platinum produced in the world, and 65% of South Africa’s PGMs. Chromite is the other major mineral mined throughout the province, and there are several ferrochrome smelters and other processing plants. South Africa produces about 70% of the world’s chrome. Gold and uranium are found along the border of the province with Gauteng and the Free State (in Klerksdorp and Orkney). Diamonds are mined at Christiana, Bloemhof and Lichtenburg. Other minerals include fluorspar, vanadium, rhodium, uranium, copper, limestone, slate, phosphate, manganese, coal and nickel. Limestone quarries run by G&W Base and Industrial Minerals in the Marico District are located next to a PPC cement factory. One of the last economically viable limestone deposits in South Africa is mined and processed by Sephaku Cement. Sephaku runs a 6 000-ton-per-day clinker plant near Lichtenburg. AfriSam, PPC and Lafarge are active in the Mahikeng/Lichtenburg area, but Sephaku is confident that its clinker and cement-production facilities will be supported by raw materials for at least 30 years. AfriSam has taken measures to reduce carbon emissions at its Dudfield cement plant. ■