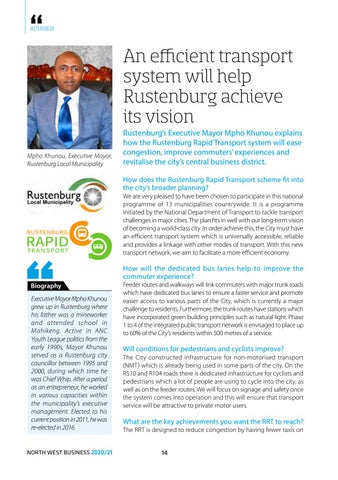 Rustenburg’s Executive Mayor Mpho Khunou explains how the Rustenburg Rapid Transport system will ease congestion, improve commuters’ experiences and revitalise the city’s central business district. How does the Rustenburg Rapid Transport scheme fit into the city’s broader planning? We are very pleased to have been chosen to participate in this national programme of 13 municipalities countrywide. It is a programme initiated by the National Department of Transport to tackle transport challenges in major cities. The plan fits in well with our long-term vision of becoming a world-class city. In order achieve this, the City must have an efficient transport system which is universally accessible, reliable and provides a linkage with other modes of transport. With this new transport network, we aim to facilitate a more efficient economy.

How will the dedicated bus lanes help to improve the commuter experience? Biography Executive Mayor Mpho Khunou grew up in Rustenburg where his father was a mineworker and attended school in Mahikeng. Active in ANC Youth League politics from the early 1990s, Mayor Khunou served as a Rustenburg city councillor between 1995 and 2000, during which time he was Chief Whip. After a period as an entrepreneur, he worked in various capacities within the municipality’s executive management. Elected to his current position in 2011, he was re-elected in 2016.

Feeder routes and walkways will link commuters with major trunk roads which have dedicated bus lanes to ensure a faster service and promote easier access to various parts of the City, which is currently a major challenge to residents. Furthermore, the trunk routes have stations which have incorporated green building principles such as natural light. Phase 1 to 4 of the integrated public transport network is envisaged to place up to 60% of the City’s residents within 500 metres of a service.

Will conditions for pedestrians and cyclists improve? The City constructed infrastructure for non-motorised transport (NMT) which is already being used in some parts of the city. On the R510 and R104 roads there is dedicated infrastructure for cyclists and pedestrians which a lot of people are using to cycle into the city, as well as on the feeder routes. We will focus on signage and safety once the system comes into operation and this will ensure that transport service will be attractive to private motor users.

What are the key achievements you want the RRT to reach? The RRT is designed to reduce congestion by having fewer taxis on