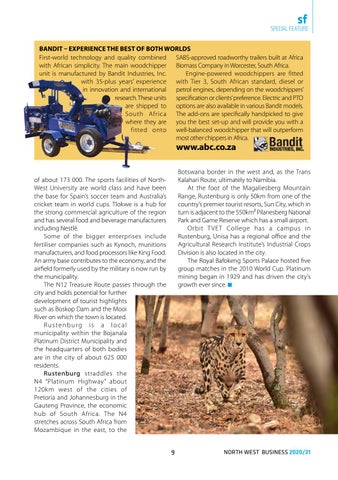 SPECIAL FEATURE BANDIT – EXPERIENCE THE BEST OF BOTH WORLDS First-world technology and quality combined SABS-approved roadworthy trailers built at Africa with African simplicity. The main woodchipper Biomass Company in Worcester, South Africa. unit is manufactured by Bandit Industries, Inc. Engine-powered woodchippers are fitted with 35-plus years’ experience with Tier 3, South African standard, diesel or in innovation and international petrol engines, depending on the woodchippers’ research. These units specification or clients’ preference. Electric and PTO are shipped to options are also available in various Bandit models. South Africa The add-ons are specifically handpicked to give where they are you the best set-up and will provide you with a fitted onto well-balanced woodchipper that will outperform most other chippers in Africa.

Botswana border in the west and, as the Trans Kalahari Route, ultimately to Namibia. At the foot of the Magaliesberg Mountain Range, Rustenburg is only 50km from one of the country’s premier tourist resorts, Sun City, which in turn is adjacent to the 550km² Pilanesberg National Park and Game Reserve which has a small airport. Orbit T VET College has a campus in Rustenburg, Unisa has a regional office and the Agricultural Research Institute’s Industrial Crops Division is also located in the city. The Royal Bafokeng Sports Palace hosted five group matches in the 2010 World Cup. Platinum mining began in 1929 and has driven the city’s growth ever since. ■

of about 173 000. The sports facilities of NorthWest University are world class and have been the base for Spain’s soccer team and Australia’s cricket team in world cups. Tlokwe is a hub for the strong commercial agriculture of the region and has several food and beverage manufacturers including Nestlé. Some of the bigger enterprises include fertiliser companies such as Kynoch, munitions manufacturers, and food processors like King Food. An army base contributes to the economy, and the airfield formerly used by the military is now run by the municipality. The N12 Treasure Route passes through the city and holds potential for further development of tourist highlights such as Boskop Dam and the Mooi River on which the town is located. Rustenburg is a local municipality within the Bojanala Platinum District Municipality and the headquarters of both bodies are in the city of about 625 000 residents. Rustenburg straddles the N4 “Platinum Highway” about 120km west of the cities of Pretoria and Johannesburg in the Gauteng Province, the economic hub of South Africa. The N4 stretches across South Africa from Mozambique in the east, to the