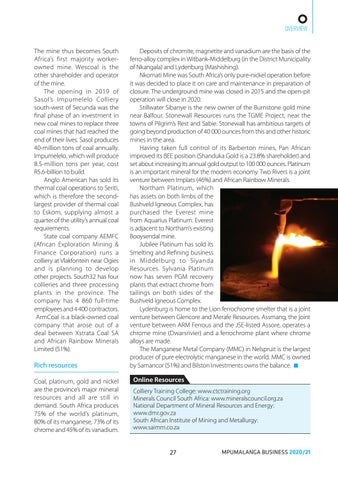 OVERVIEW The mine thus becomes South Africa’s first majority workerowned mine. Wescoal is the other shareholder and operator of the mine. The opening in 2019 of Sasol’s Impumelelo Colliery south-west of Secunda was the final phase of an investment in new coal mines to replace three coal mines that had reached the end of their lives. Sasol produces 40-million tons of coal annually. Impumelelo, which will produce 8.5-million tons per year, cost R5.6-billion to build. Anglo American has sold its thermal coal operations to Seriti, which is therefore the secondlargest provider of thermal coal to Eskom, supplying almost a quarter of the utility’s annual coal requirements. State coal company AEMFC (African Exploration Mining & Finance Corporation) runs a colliery at Vlakfontein near Ogies and is planning to develop other projects. South32 has four collieries and three processing plants in the province. The company has 4 860 full-time employees and 4 400 contractors. ArmCoal is a black-owned coal company that arose out of a deal between Xstrata Coal SA and African Rainbow Minerals Limited (51%).

Rich resources Coal, platinum, gold and nickel are the province’s major mineral resources and all are still in demand. South Africa produces 75% of the world’s platinum, 80% of its manganese, 73% of its chrome and 45% of its vanadium.

Deposits of chromite, magnetite and vanadium are the basis of the ferro-alloy complex in Witbank-Middelburg (in the District Municipality of Nkangala) and Lydenburg (Mashishing). Nkomati Mine was South Africa’s only pure-nickel operation before it was decided to place it on care and maintenance in preparation of closure. The underground mine was closed in 2015 and the open-pit operation will close in 2020. Stillwater Sibanye is the new owner of the Burnstone gold mine near Balfour. Stonewall Resources runs the TGME Project, near the towns of Pilgrim’s Rest and Sabie. Stonewall has ambitious targets of going beyond production of 40 000 ounces from this and other historic mines in the area. Having taken full control of its Barberton mines, Pan African improved its BEE position (Shanduka Gold is a 23.8% shareholder) and set about increasing its annual gold output to 100 000 ounces. Platinum is an important mineral for the modern economy. Two Rivers is a joint venture between Implats (46%) and African Rainbow Minerals. Northam Platinum, which has assets on both limbs of the Bushveld Igneous Complex, has purchased the Everest mine from Aquarius Platinum. Everest is adjacent to Northam’s existing Booysendal mine. Jubilee Platinum has sold its Smelting and Refining business in Middelburg to Siyanda Resources. Sylvania Platinum now has seven PGM recovery plants that extract chrome from tailings on both sides of the Bushveld Igneous Complex. Lydenburg is home to the Lion ferrochrome smelter that is a joint venture between Glencore and Merafe Resources. Assmang, the joint venture between ARM Ferrous and the JSE-listed Assore, operates a chrome mine (Dwarsrivier) and a ferrochrome plant where chrome alloys are made. The Manganese Metal Company (MMC) in Nelspruit is the largest producer of pure electrolytic manganese in the world. MMC is owned by Samancor (51%) and Bilston Investments owns the balance. ■

Mpumalanga has several investment and business opportunities in a wide range of sectors. In addition to the regular articles providing insig...

Mpumalanga has several investment and business opportunities in a wide range of sectors. In addition to the regular articles providing insig...