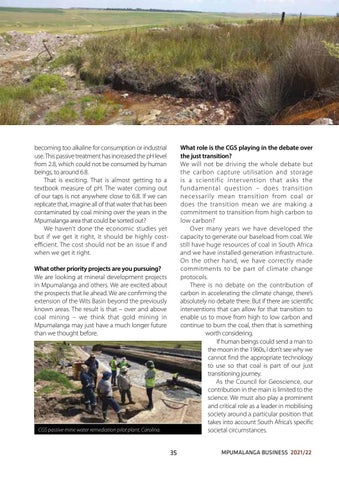 What role is the CGS playing in the debate over the just transition? We will not be driving the whole debate but the carbon capture utilisation and storage is a scientific inter vention that asks the fundamental question – does transition necessarily mean transition from coal or does the transition mean we are making a commitment to transition from high carbon to low carbon? Over many years we have developed the capacity to generate our baseload from coal. We still have huge resources of coal in South Africa and we have installed generation infrastructure. On the other hand, we have correctly made commitments to be part of climate change protocols. There is no debate on the contribution of carbon in accelerating the climate change, there’s absolutely no debate there. But if there are scientific interventions that can allow for that transition to enable us to move from high to low carbon and continue to burn the coal, then that is something worth considering. If human beings could send a man to the moon in the 1960s, I don’t see why we cannot find the appropriate technology to use so that coal is part of our just transitioning journey. As the Council for Geoscience, our contribution in the main is limited to the science. We must also play a prominent and critical role as a leader in mobilising society around a particular position that takes into account South Africa’s specific societal circumstances.

becoming too alkaline for consumption or industrial use. This passive treatment has increased the pH level from 2.8, which could not be consumed by human beings, to around 6.8. That is exciting. That is almost getting to a textbook measure of pH. The water coming out of our taps is not anywhere close to 6.8. If we can replicate that, imagine all of that water that has been contaminated by coal mining over the years in the Mpumalanga area that could be sorted out? We haven’t done the economic studies yet but if we get it right, it should be highly costefficient. The cost should not be an issue if and when we get it right. What other priority projects are you pursuing? We are looking at mineral development projects in Mpumalanga and others. We are excited about the prospects that lie ahead. We are confirming the extension of the Wits Basin beyond the previously known areas. The result is that – over and above coal mining – we think that gold mining in Mpumalanga may just have a much longer future than we thought before.