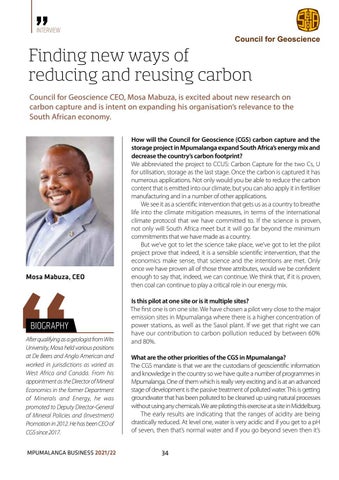 Finding new ways of reducing and reusing carbon Council for Geoscience CEO, Mosa Mabuza, is excited about new research on carbon capture and is intent on expanding his organisation’s relevance to the South African economy.

BIOGRAPHY After qualifying as a geologist from Wits University, Mosa held various positions at De Beers and Anglo American and worked in jurisdictions as varied as West Africa and Canada. From his appointment as the Director of Mineral Economics in the former Department of Minerals and Energy, he was promoted to Deputy Director-General of Mineral Policies and (Investment) Promotion in 2012. He has been CEO of CGS since 2017. MPUMALANGA BUSINESS 2021/22

How will the Council for Geoscience (CGS) carbon capture and the storage project in Mpumalanga expand South Africa’s energy mix and decrease the country’s carbon footprint? We abbreviated the project to CCUS: Carbon Capture for the two Cs, U for utilisation, storage as the last stage. Once the carbon is captured it has numerous applications. Not only would you be able to reduce the carbon content that is emitted into our climate, but you can also apply it in fertiliser manufacturing and in a number of other applications. We see it as a scientific intervention that gets us as a country to breathe life into the climate mitigation measures, in terms of the international climate protocol that we have committed to. If the science is proven, not only will South Africa meet but it will go far beyond the minimum commitments that we have made as a country. But we’ve got to let the science take place, we’ve got to let the pilot project prove that indeed, it is a sensible scientific intervention, that the economics make sense, that science and the intentions are met. Only once we have proven all of those three attributes, would we be confident enough to say that, indeed, we can continue. We think that, if it is proven, then coal can continue to play a critical role in our energy mix. Is this pilot at one site or is it multiple sites? The first one is on one site. We have chosen a pilot very close to the major emission sites in Mpumalanga where there is a higher concentration of power stations, as well as the Sasol plant. If we get that right we can have our contribution to carbon pollution reduced by between 60% and 80%. What are the other priorities of the CGS in Mpumalanga? The CGS mandate is that we are the custodians of geoscientific information and knowledge in the country so we have quite a number of programmes in Mpumalanga. One of them which is really very exciting and is at an advanced stage of development is the passive treatment of polluted water. This is getting groundwater that has been polluted to be cleaned up using natural processes without using any chemicals. We are piloting this exercise at a site in Middelburg. The early results are indicating that the ranges of acidity are being drastically reduced. At level one, water is very acidic and if you get to a pH of seven, then that’s normal water and if you go beyond seven then it’s