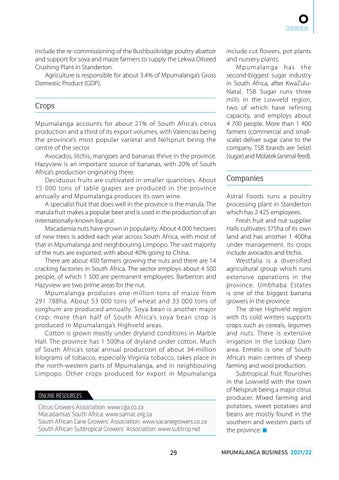 OVERVIEW include the re-commissioning of the Bushbuckridge poultry abattoir and support for soya and maize farmers to supply the Lekwa Oilseed Crushing Plant in Standerton. Agriculture is responsible for about 3.4% of Mpumalanga’s Gross Domestic Product (GDP).

Crops Mpumalanga accounts for about 21% of South Africa’s citrus production and a third of its export volumes, with Valencias being the province’s most popular varietal and Nelspruit being the centre of the sector. Avocados, litchis, mangoes and bananas thrive in the province. Hazyview is an important source of bananas, with 20% of South Africa’s production originating there. Deciduous fruits are cultivated in smaller quantities. About 15 000 tons of table grapes are produced in the province annually and Mpumalanga produces its own wine. A specialist fruit that does well in the province is the marula. The marula fruit makes a popular beer and is used in the production of an internationally-known liqueur. Macadamia nuts have grown in popularity. About 4 000 hectares of new trees is added each year across South Africa, with most of that in Mpumalanga and neighbouring Limpopo. The vast majority of the nuts are exported, with about 40% going to China. There are about 450 farmers growing the nuts and there are 14 cracking factories in South Africa. The sector employs about 4 500 people, of which 1 500 are permanent employees. Barberton and Hazyview are two prime areas for the nut. Mpumalanga produces one-million tons of maize from 291 788ha. About 53 000 tons of wheat and 33 000 tons of sorghum are produced annually. Soya bean is another major crop: more than half of South Africa’s soya bean crop is produced in Mpumalanga’s Highveld areas. Cotton is grown mostly under dryland conditions in Marble Hall. The province has 1 500ha of dryland under cotton. Much of South Africa’s total annual production of about 34-million kilograms of tobacco, especially Virginia tobacco, takes place in the north-western parts of Mpumalanga, and in neighbouring Limpopo. Other crops produced for export in Mpumalanga

include cut flowers, pot plants and nursery plants. M pumalanga has the second-biggest sugar industry in South Africa, after KwaZuluNatal. TSB Sugar runs three mills in the Lowveld region, two of which have refining capacity, and employs about 4 700 people. More than 1 400 farmers (commercial and smallscale) deliver sugar cane to the company. TSB brands are Selati (sugar) and Molatek (animal feed).

Companies Astral Foods runs a poultry processing plant in Standerton which has 2 425 employees. Fresh fruit and nut supplier Halls cultivates 375ha of its own land and has another 1 400ha under management. Its crops include avocados and litchis. Westfalia is a diversified agricultural group which runs extensive operations in the province. Umbhaba Estates is one of the biggest banana growers in the province. The drier Highveld region with its cold winters supports crops such as cereals, legumes and nuts. There is extensive irrigation in the Loskop Dam area. Ermelo is one of South Africa’s main centres of sheep farming and wool production. Subtropical fruit flourishes in the Lowveld with the town of Nelspruit being a major citrus producer. Mixed farming and potatoes, sweet potatoes and beans are mostly found in the southern and western parts of the province. ■ MPUMALANGA BUSINESS 2021/22