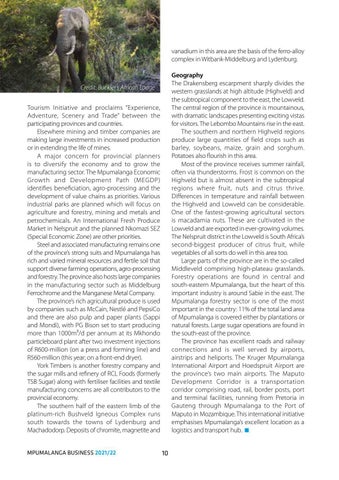 vanadium in this area are the basis of the ferro-alloy complex in Witbank-Middelburg and Lydenburg. Geography The Drakensberg escarpment sharply divides the western grasslands at high altitude (Highveld) and the subtropical component to the east, the Lowveld. The central region of the province is mountainous, with dramatic landscapes presenting exciting vistas for visitors. The Lebombo Mountains rise in the east. The southern and northern Highveld regions produce large quantities of field crops such as barley, soybeans, maize, grain and sorghum. Potatoes also flourish in this area. Most of the province receives summer rainfall, often via thunderstorms. Frost is common on the Highveld but is almost absent in the subtropical regions where fruit, nuts and citrus thrive. Differences in temperature and rainfall between the Highveld and Lowveld can be considerable. One of the fastest-growing agricultural sectors is macadamia nuts. These are cultivated in the Lowveld and are exported in ever-growing volumes. The Nelspruit district in the Lowveld is South Africa’s second-biggest producer of citrus fruit, while vegetables of all sorts do well in this area too. Large parts of the province are in the so-called Middleveld comprising high-plateau grasslands. Forestry operations are found in central and south-eastern Mpumalanga, but the heart of this important industry is around Sabie in the east. The Mpumalanga forestry sector is one of the most important in the country: 11% of the total land area of Mpumalanga is covered either by plantations or natural forests. Large sugar operations are found in the south-east of the province. The province has excellent roads and railway connections and is well served by airports, airstrips and heliports. The Kruger Mpumalanga International Airport and Hoedspruit Airport are the province’s two main airports. The Maputo Development Corridor is a transportation corridor comprising road, rail, border posts, port and terminal facilities, running from Pretoria in Gauteng through Mpumalanga to the Port of Maputo in Mozambique. This international initiative emphasises Mpumalanga’s excellent location as a logistics and transport hub. ■

Credit: Buckler’s African Lodge Tourism Initiative and proclaims “Experience, Adventure, Scenery and Trade” between the participating provinces and countries. Elsewhere mining and timber companies are making large investments in increased production or in extending the life of mines. A major concern for provincial planners is to diversify the economy and to grow the manufacturing sector. The Mpumalanga Economic Growth and Development Path (MEGDP) identifies beneficiation, agro-processing and the development of value chains as priorities. Various industrial parks are planned which will focus on agriculture and forestry, mining and metals and petrochemicals. An International Fresh Produce Market in Nelspruit and the planned Nkomazi SEZ (Special Economic Zone) are other priorities. Steel and associated manufacturing remains one of the province’s strong suits and Mpumalanga has rich and varied mineral resources and fertile soil that support diverse farming operations, agro-processing and forestry. The province also hosts large companies in the manufacturing sector such as Middelburg Ferrochrome and the Manganese Metal Company. The province’s rich agricultural produce is used by companies such as McCain, Nestlé and PepsiCo and there are also pulp and paper plants (Sappi and Mondi), with PG Bison set to start producing more than 1000m³/d per annum at its Mkhondo particleboard plant after two investment injections of R600-million (on a press and forming line) and R560-million (this year; on a front-end dryer). York Timbers is another forestry company and the sugar mills and refinery of RCL Foods (formerly TSB Sugar) along with fertiliser facilities and textile manufacturing concerns are all contributors to the provincial economy. The southern half of the eastern limb of the platinum-rich Bushveld Igneous Complex runs south towards the towns of Lydenburg and Machadodorp. Deposits of chromite, magnetite and MPUMALANGA BUSINESS 2021/22