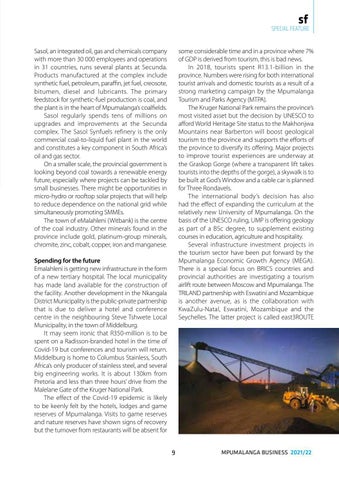 SPECIAL FEATURE some considerable time and in a province where 7% of GDP is derived from tourism, this is bad news. In 2018, tourists spent R13.1-billion in the province. Numbers were rising for both international tourist arrivals and domestic tourists as a result of a strong marketing campaign by the Mpumalanga Tourism and Parks Agency (MTPA). The Kruger National Park remains the province’s most visited asset but the decision by UNESCO to afford World Heritage Site status to the Makhonjwa Mountains near Barberton will boost geological tourism to the province and supports the efforts of the province to diversify its offering. Major projects to improve tourist experiences are underway at the Graskop Gorge (where a transparent lift takes tourists into the depths of the gorge), a skywalk is to be built at God’s Window and a cable car is planned for Three Rondavels. The international body’s decision has also had the effect of expanding the curriculum at the relatively new University of Mpumalanga. On the basis of the UNESCO ruling, UMP is offering geology as part of a BSc degree, to supplement existing courses in education, agriculture and hospitality. Several infrastructure investment projects in the tourism sector have been put forward by the Mpumalanga Economic Growth Agency (MEGA). There is a special focus on BRICS countries and provincial authorities are investigating a tourism airlift route between Moscow and Mpumalanga. The TRILAND partnership with Eswatini and Mozambique is another avenue, as is the collaboration with KwaZulu-Natal, Eswatini, Mozambique and the Seychelles. The latter project is called east3ROUTE

Sasol, an integrated oil, gas and chemicals company with more than 30 000 employees and operations in 31 countries, runs several plants at Secunda. Products manufactured at the complex include synthetic fuel, petroleum, paraffin, jet fuel, creosote, bitumen, diesel and lubricants. The primary feedstock for synthetic-fuel production is coal, and the plant is in the heart of Mpumalanga’s coalfields. Sasol regularly spends tens of millions on upgrades and improvements at the Secunda complex. The Sasol Synfuels refinery is the only commercial coal-to-liquid fuel plant in the world and constitutes a key component in South Africa’s oil and gas sector. On a smaller scale, the provincial government is looking beyond coal towards a renewable energy future, especially where projects can be tackled by small businesses. There might be opportunities in micro-hydro or rooftop solar projects that will help to reduce dependence on the national grid while simultaneously promoting SMMEs. The town of eMalahleni (Witbank) is the centre of the coal industry. Other minerals found in the province include gold, platinum-group minerals, chromite, zinc, cobalt, copper, iron and manganese. Spending for the future Emalahleni is getting new infrastructure in the form of a new tertiary hospital. The local municipality has made land available for the construction of the facility. Another development in the Nkangala District Municipality is the public-private partnership that is due to deliver a hotel and conference centre in the neighbouring Steve Tshwete Local Municipality, in the town of Middelburg. It may seem ironic that R350-million is to be spent on a Radisson-branded hotel in the time of Covid-19 but conferences and tourism will return. Middelburg is home to Columbus Stainless, South Africa’s only producer of stainless steel, and several big engineering works. It is about 130km from Pretoria and less than three hours’ drive from the Malelane Gate of the Kruger National Park. The effect of the Covid-19 epidemic is likely to be keenly felt by the hotels, lodges and game reserves of Mpumalanga. Visits to game reserves and nature reserves have shown signs of recovery but the turnover from restaurants will be absent for