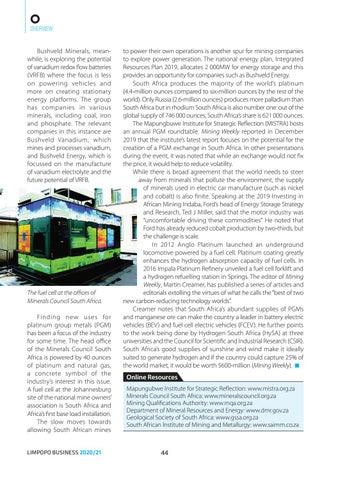 OVERVIEW Bushveld Minerals, meanwhile, is exploring the potential of vanadium redox flow batteries (VRFB) where the focus is less on powering vehicles and more on creating stationary energy platforms. The group has companies in various minerals, including coal, iron and phosphate. The relevant companies in this instance are Bushveld Vanadium, which mines and processes vanadium, and Bushveld Energy, which is focussed on the manufacture of vanadium electrolyte and the future potential of VRFB.

The fuel cell at the offices of Minerals Council South Africa. Finding new uses for platinum group metals (PGM) has been a focus of the industry for some time. The head office of the Minerals Council South Africa is powered by 40 ounces of platinum and natural gas, a concrete symbol of the industry’s interest in this issue. A fuel cell at the Johannesburg site of the national mine owners’ association is South Africa and Africa’s first base load installation. The slow moves towards allowing South African mines LIMPOPO BUSINESS 2020/21

to power their own operations is another spur for mining companies to explore power generation. The national energy plan, Integrated Resources Plan 2019, allocates 2 000MW for energy storage and this provides an opportunity for companies such as Bushveld Energy. South Africa produces the majority of the world’s platinum (4.4-million ounces compared to six-million ounces by the rest of the world). Only Russia (2.6-million ounces) produces more palladium than South Africa but in rhodium South Africa is also number one: out of the global supply of 746 000 ounces, South Africa’s share is 621 000 ounces. The Mapungbuwe Institute for Strategic Reflection (MISTRA) hosts an annual PGM roundtable. Mining Weekly reported in December 2019 that the institute’s latest report focuses on the potential for the creation of a PGM exchange in South Africa. In other presentations during the event, it was noted that while an exchange would not fix the price, it would help to reduce volatility. While there is broad agreement that the world needs to steer away from minerals that pollute the environment, the supply of minerals used in electric car manufacture (such as nickel and cobalt) is also finite. Speaking at the 2019 Investing in African Mining Indaba, Ford’s head of Energy Storage Strategy and Research, Ted J Miller, said that the motor industry was “uncomfortable driving these commodities”. He noted that Ford has already reduced cobalt production by two-thirds, but the challenge is scale. In 2012 Anglo Platinum launched an underground locomotive powered by a fuel cell. Platinum coating greatly enhances the hydrogen absorption capacity of fuel cells. In 2016 Impala Platinum Refinery unveiled a fuel cell forklift and a hydrogen refuelling station in Springs. The editor of Mining Weekly, Martin Creamer, has published a series of articles and editorials extolling the virtues of what he calls the “best of two new carbon-reducing technology worlds”. Creamer notes that South Africa’s abundant supplies of PGMs and manganese ore can make the country a leader in battery electric vehicles (BEV) and fuel cell electric vehicles (FCEV). He further points to the work being done by Hydrogen South Africa (HySA) at three universities and the Council for Scientific and Industrial Research (CSIR). South Africa’s good supplies of sunshine and wind make it ideally suited to generate hydrogen and if the country could capture 25% of the world market, it would be worth $600-million (Mining Weekly). ■