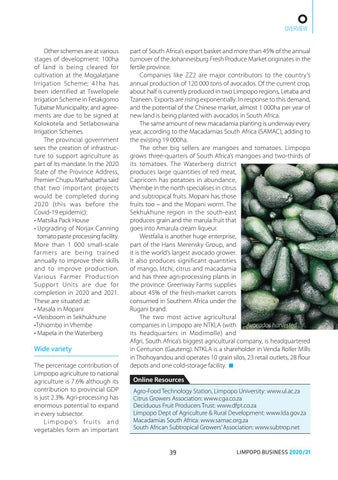 OVERVIEW Other schemes are at various stages of development: 100ha of land is being cleared for cultivation at the Mogalatjane Irrigation Scheme; 41ha has been identified at Tswelopele Irrigation Scheme in Fetakgomo Tubatse Municipality; and agreements are due to be signed at Kolokotela and Setlaboswana Irrigation Schemes. The provincial government sees the creation of infrastructure to support agriculture as part of its mandate. In the 2020 State of the Province Address, Premier Chupu Mathabatha said that two important projects would be completed during 2020 (this was before the Covid-19 epidemic): • Matsika Pack House • Upgrading of Norjax Canning tomato paste processing facility. More than 1 000 small-scale farmers are being trained annually to improve their skills and to improve production. Various Farmer Production Support Units are due for completion in 2020 and 2021. These are situated at: • Masala in Mopani • Vleisboom in Sekhukhune •Tshiombo in Vhembe • Mapela in the Waterberg

Wide variety The percentage contribution of Limpopo agriculture to national agriculture is 7.6% although its contribution to provincial GDP is just 2.3%. Agri-processing has enormous potential to expand in every subsector. L i m p o p o’s f r u i t s a n d vegetables form an important

part of South Africa’s export basket and more than 45% of the annual turnover of the Johannesburg Fresh Produce Market originates in the fertile province. Companies like ZZ2 are major contributors to the country’s annual production of 120 000 tons of avocados. Of the current crop, about half is currently produced in two Limpopo regions, Letaba and Tzaneen. Exports are rising exponentially. In response to this demand, and the potential of the Chinese market, almost 1 000ha per year of new land is being planted with avocados in South Africa. The same amount of new macadamia planting is underway every year, according to the Macadamias South Africa (SAMAC), adding to the existing 19 000ha. The other big sellers are mangoes and tomatoes. Limpopo grows three-quarters of South Africa’s mangoes and two-thirds of its tomatoes. The Waterberg district produces large quantities of red meat, Capricorn has potatoes in abundance, Vhembe in the north specialises in citrus and subtropical fruits. Mopani has those fruits too – and the Mopani worm. The Sekhukhune region in the south-east produces grain and the marula fruit that goes into Amarula cream liqueur. Westfalia is another huge enterprise, part of the Hans Merensky Group, and it is the world’s largest avocado grower. It also produces significant quantities of mango, litchi, citrus and macadamia and has three agri-processing plants in the province. Greenway Farms supplies about 45% of the fresh-market carrots consumed in Southern Africa under the Rugani brand. The two most active agricultural Avocados harvested companies in Limpopo are NTKLA (with its headquarters in Modimolle) and Afgri, South Africa’s biggest agricultural company, is headquartered in Centurion (Gauteng). NTKLA is a shareholder in Venda Roller Mills in Thohoyandou and operates 10 grain silos, 23 retail outlets, 28 flour depots and one cold-storage facility. ■