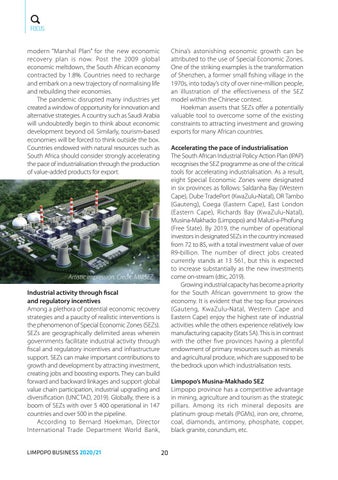 FOCUS modern “Marshal Plan” for the new economic recovery plan is now. Post the 2009 global economic meltdown, the South African economy contracted by 1.8%. Countries need to recharge and embark on a new trajectory of normalising life and rebuilding their economies. The pandemic disrupted many industries yet created a window of opportunity for innovation and alternative strategies. A country such as Saudi Arabia will undoubtedly begin to think about economic development beyond oil. Similarly, tourism-based economies will be forced to think outside the box. Countries endowed with natural resources such as South Africa should consider strongly accelerating the pace of industrialisation through the production of value-added products for export.

China’s astonishing economic growth can be attributed to the use of Special Economic Zones. One of the striking examples is the transformation of Shenzhen, a former small fishing village in the 1970s, into today’s city of over nine-million people, an illustration of the effectiveness of the SEZ model within the Chinese context. Hoekman asserts that SEZs offer a potentially valuable tool to overcome some of the existing constraints to attracting investment and growing exports for many African countries. Accelerating the pace of industrialisation The South African Industrial Policy Action Plan (IPAP) recognises the SEZ programme as one of the critical tools for accelerating industrialisation. As a result, eight Special Economic Zones were designated in six provinces as follows: Saldanha Bay (Western Cape), Dube TradePort (KwaZulu-Natal), OR Tambo (Gauteng), Coega (Eastern Cape), East London (Eastern Cape), Richards Bay (KwaZulu-Natal), Musina-Makhado (Limpopo) and Maluti-a-Phofung (Free State). By 2019, the number of operational investors in designated SEZs in the country increased from 72 to 85, with a total investment value of over R9-billion. The number of direct jobs created currently stands at 13 561, but this is expected to increase substantially as the new investments come on-stream (dtic, 2019). Growing industrial capacity has become a priority for the South African government to grow the economy. It is evident that the top four provinces (Gauteng, KwaZulu-Natal, Western Cape and Eastern Cape) enjoy the highest rate of industrial activities while the others experience relatively low manufacturing capacity (Stats SA). This is in contrast with the other five provinces having a plentiful endowment of primary resources such as minerals and agricultural produce, which are supposed to be the bedrock upon which industrialisation rests.

Artistic impression. Credit: MMSEZ Industrial activity through fiscal and regulatory incentives Among a plethora of potential economic recovery strategies and a paucity of realistic interventions is the phenomenon of Special Economic Zones (SEZs). SEZs are geographically delimited areas wherein governments facilitate industrial activity through fiscal and regulatory incentives and infrastructure support. SEZs can make important contributions to growth and development by attracting investment, creating jobs and boosting exports. They can build forward and backward linkages and support global value chain participation, industrial upgrading and diversification (UNCTAD, 2019). Globally, there is a boom of SEZs with over 5 400 operational in 147 countries and over 500 in the pipeline. According to Bernard Hoekman, Director International Trade Department World Bank, LIMPOPO BUSINESS 2020/21