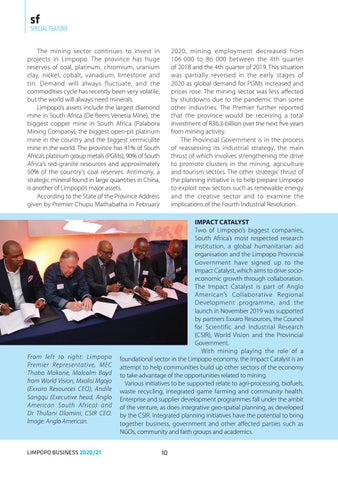 SPECIAL FEATURE The mining sector continues to invest in projects in Limpopo. The province has huge reserves of coal, platinum, chromium, uranium clay, nickel, cobalt, vanadium, limestone and tin. Demand will always fluctuate, and the commodities cycle has recently been very volatile, but the world will always need minerals. Limpopo’s assets include the largest diamond mine in South Africa (De Beers Venetia Mine), the biggest copper mine in South Africa (Palabora Mining Company), the biggest open-pit platinum mine in the country and the biggest vermiculite mine in the world. The province has 41% of South Africa’s platinum group metals (PGMs), 90% of South Africa’s red-granite resources and approximately 50% of the country’s coal reserves. Antimony, a strategic mineral found in large quantities in China, is another of Limpopo’s major assets. According to the State of the Province Address given by Premier Chupu Mathabatha in February

2020, mining employment decreased from 106 000 to 86 000 between the 4th quarter of 2018 and the 4th quarter of 2019. This situation was partially reversed in the early stages of 2020 as global demand for PGMs increased and prices rose. The mining sector was less affected by shutdowns due to the pandemic than some other industries. The Premier further reported that the province would be receiving a total investment of R36.3-billion over the next five years from mining activity. The Provincial Government is in the process of reassessing its industrial strategy, the main thrust of which involves strengthening the drive to promote clusters in the mining, agriculture and tourism sectors. The other strategic thrust of the planning initiative is to help prepare Limpopo to exploit new sectors such as renewable energy and the creative sector and to examine the implications of the Fourth Industrial Revolution.

IMPACT CATALYST Two of Limpopo’s biggest companies, South Africa’s most respected research institution, a global humanitarian aid organisation and the Limpopo Provincial Government have signed up to the Impact Catalyst, which aims to drive socioeconomic growth through collaboration. The Impact Catalyst is part of Anglo American’s Collaborative Regional Development programme, and the launch in November 2019 was supported by partners Exxaro Resources, the Council for Scientific and Industrial Research (CSIR), World Vision and the Provincial Government. With mining playing the role of a foundational sector in the Limpopo economy, the Impact Catalyst is an attempt to help communities build up other sectors of the economy to take advantage of the opportunities related to mining. Various initiatives to be supported relate to agri-processing, biofuels, waste recycling, integrated game farming and community health. Enterprise and supplier development programmes fall under the ambit of the venture, as does integrative geo-spatial planning, as developed by the CSIR. Integrated planning initiatives have the potential to bring together business, government and other affected parties such as NGOs, community and faith groups and academics.