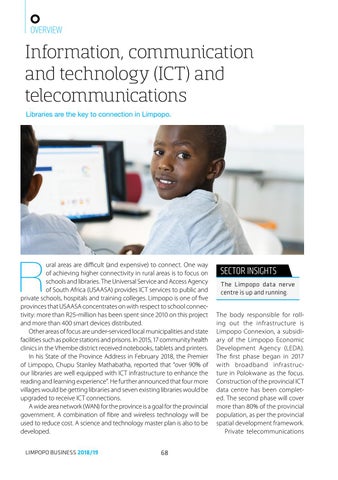 Information, communication and technology (ICT) and telecommunications Libraries are the key to connection in Limpopo.

ural areas are difficult (and expensive) to connect. One way of achieving higher connectivity in rural areas is to focus on schools and libraries. The Universal Service and Access Agency of South Africa (USAASA) provides ICT services to public and private schools, hospitals and training colleges. Limpopo is one of five provinces that USAASA concentrates on with respect to school connectivity: more than R25-million has been spent since 2010 on this project and more than 400 smart devices distributed. Other areas of focus are under-serviced local municipalities and state facilities such as police stations and prisons. In 2015, 17 community health clinics in the Vhembe district received notebooks, tablets and printers. In his State of the Province Address in February 2018, the Premier of Limpopo, Chupu Stanley Mathabatha, reported that “over 90% of our libraries are well equipped with ICT infrastructure to enhance the reading and learning experience”. He further announced that four more villages would be getting libraries and seven existing libraries would be upgraded to receive ICT connections. A wide area network (WAN) for the province is a goal for the provincial government. A combination of fibre and wireless technology will be used to reduce cost. A science and technology master plan is also to be developed. LIMPOPO BUSINESS 2018/19

SECTOR INSIGHTS The Limpopo data nerve centre is up and running. The body responsible for rolling out the infrastructure is Limpopo Connexion, a subsidiary of the Limpopo Economic Development Agency (LEDA). The first phase began in 2017 with broadband infrastructure in Polokwane as the focus. Construction of the provincial ICT data centre has been completed. The second phase will cover more than 80% of the provincial population, as per the provincial spatial development framework. Private telecommunications

A unique guide to business and investment in Limpopo Province, South Africa. Launched in 2007, the 2018/19 edition of Limpopo Business is th...

A unique guide to business and investment in Limpopo Province, South Africa. Launched in 2007, the 2018/19 edition of Limpopo Business is th...