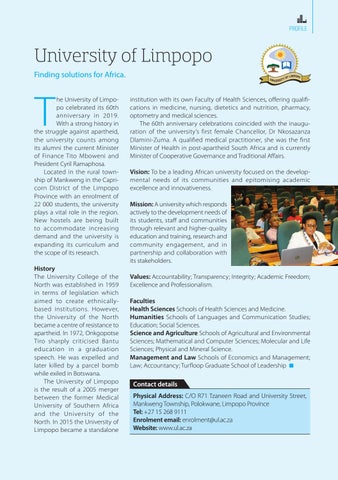 he University of Limpopo celebrated its 60th anniversary in 2019. With a strong history in the struggle against apartheid, the university counts among its alumni the current Minister of Finance Tito Mboweni and President Cyril Ramaphosa. Located in the rural township of Mankweng in the Capricorn District of the Limpopo Province with an enrolment of 22 000 students, the university plays a vital role in the region. New hostels are being built to accommodate increasing demand and the university is expanding its curriculum and the scope of its research.

institution with its own Faculty of Health Sciences, offering qualifications in medicine, nursing, dietetics and nutrition, pharmacy, optometry and medical sciences. The 60th anniversary celebrations coincided with the inauguration of the university’s first female Chancellor, Dr Nkosazanza Dlamini-Zuma. A qualified medical practitioner, she was the first Minister of Health in post-apartheid South Africa and is currently Minister of Cooperative Governance and Traditional Affairs.

Vision: To be a leading African university focused on the developmental needs of its communities and epitomising academic excellence and innovativeness. Mission: A university which responds actively to the development needs of its students, staff and communities through relevant and higher-quality education and training, research and community engagement, and in partnership and collaboration with its stakeholders. Values: Accountability; Transparency; Integrity; Academic Freedom; Excellence and Professionalism. Faculties Health Sciences Schools of Health Sciences and Medicine. Humanities Schools of Languages and Communication Studies; Education; Social Sciences. Science and Agriculture Schools of Agricultural and Environmental Sciences; Mathematical and Computer Sciences; Molecular and Life Sciences; Physical and Mineral Science. Management and Law Schools of Economics and Management; Law; Accountancy; Turfloop Graduate School of Leadership ■