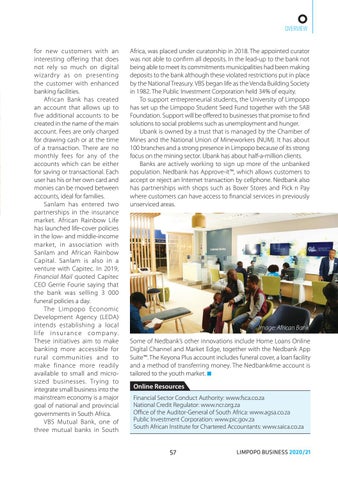 OVERVIEW for new customers with an interesting offering that does not rely so much on digital wizardry as on presenting the customer with enhanced banking facilities. African Bank has created an account that allows up to five additional accounts to be created in the name of the main account. Fees are only charged for drawing cash or at the time of a transaction. There are no monthly fees for any of the accounts which can be either for saving or transactional. Each user has his or her own card and monies can be moved between accounts, ideal for families. Sanlam has entered two partnerships in the insurance market. African Rainbow Life has launched life-cover policies in the low- and middle-income market, in association with Sanlam and African Rainbow Capital. Sanlam is also in a venture with Capitec. In 2019, Financial Mail quoted Capitec CEO Gerrie Fourie saying that the bank was selling 3 000 funeral policies a day. The Limpopo Economic Development Agency (LEDA) intends establishing a local l i fe i n s u r a n c e c o m p a ny. These initiatives aim to make banking more accessible for rural communities and to make finance more readily available to small and microsized businesses. Trying to integrate small business into the mainstream economy is a major goal of national and provincial governments in South Africa. VBS Mutual Bank, one of three mutual banks in South

Africa, was placed under curatorship in 2018. The appointed curator was not able to confirm all deposits. In the lead-up to the bank not being able to meet its commitments municipalities had been making deposits to the bank although these violated restrictions put in place by the National Treasury. VBS began life as the Venda Building Society in 1982. The Public Investment Corporation held 34% of equity. To support entrepreneurial students, the University of Limpopo has set up the Limpopo Student Seed Fund together with the SAB Foundation. Support will be offered to businesses that promise to find solutions to social problems such as unemployment and hunger. Ubank is owned by a trust that is managed by the Chamber of Mines and the National Union of Mineworkers (NUM). It has about 100 branches and a strong presence in Limpopo because of its strong focus on the mining sector. Ubank has about half-a-million clients. Banks are actively working to sign up more of the unbanked population. Nedbank has Approve-it™, which allows customers to accept or reject an Internet transaction by cellphone. Nedbank also has partnerships with shops such as Boxer Stores and Pick n Pay where customers can have access to financial services in previously unserviced areas.

Image: African Bank Some of Nedbank’s other innovations include Home Loans Online Digital Channel and Market Edge, together with the Nedbank App Suite™. The Keyona Plus account includes funeral cover, a loan facility and a method of transferring money. The Nedbank4me account is tailored to the youth market. ■