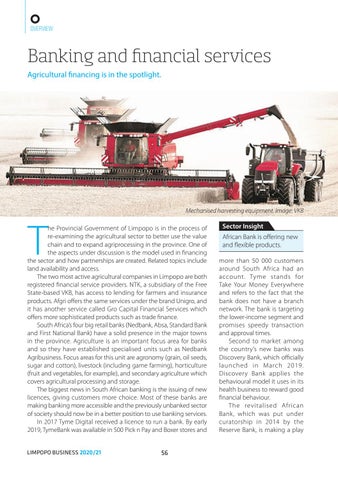 Banking and financial services Agricultural financing is in the spotlight.

he Provincial Government of Limpopo is in the process of re-examining the agricultural sector to better use the value chain and to expand agriprocessing in the province. One of the aspects under discussion is the model used in financing the sector and how partnerships are created. Related topics include land availability and access. The two most active agricultural companies in Limpopo are both registered financial service providers. NTK, a subsidiary of the Free State-based VKB, has access to lending for farmers and insurance products. Afgri offers the same services under the brand Unigro, and it has another service called Gro Capital Financial Services which offers more sophisticated products such as trade finance. South Africaâ&#x20AC;&#x2122;s four big retail banks (Nedbank, Absa, Standard Bank and First National Bank) have a solid presence in the major towns in the province. Agriculture is an important focus area for banks and so they have established specialised units such as Nedbank Agribusiness. Focus areas for this unit are agronomy (grain, oil seeds, sugar and cotton), livestock (including game farming), horticulture (fruit and vegetables, for example), and secondary agriculture which covers agricultural processing and storage. The biggest news in South African banking is the issuing of new licences, giving customers more choice. Most of these banks are making banking more accessible and the previously unbanked sector of society should now be in a better position to use banking services. In 2017 Tyme Digital received a licence to run a bank. By early 2019, TymeBank was available in 500 Pick n Pay and Boxer stores and LIMPOPO BUSINESS 2020/21

Sector Insight African Bank is offering new and flexible products. more than 50 000 customers around South Africa had an account. Tyme stands for Take Your Money Everywhere and refers to the fact that the bank does not have a branch network. The bank is targeting the lower-income segment and promises speedy transaction and approval times. Second to market among the countryâ&#x20AC;&#x2122;s new banks was Discovery Bank, which officially launched in March 2019. Discovery Bank applies the behavioural model it uses in its health business to reward good financial behaviour. The revitalised African Bank, which was put under curatorship in 2014 by the Reserve Bank, is making a play