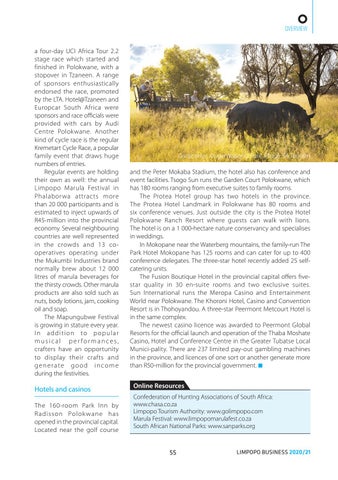 OVERVIEW a four-day UCI Africa Tour 2.2 stage race which started and finished in Polokwane, with a stopover in Tzaneen. A range of sponsors enthusiastically endorsed the race, promoted by the LTA. Hotel@Tzaneen and Europcar South Africa were sponsors and race officials were provided with cars by Audi Centre Polokwane. Another kind of cycle race is the regular Kremetart Cycle Race, a popular family event that draws huge numbers of entries. Regular events are holding their own as well: the annual Limpopo Marula Festival in Phalabor wa attracts more than 20 000 participants and is estimated to inject upwards of R45-million into the provincial economy. Several neighbouring countries are well represented in the crowds and 13 cooperatives operating under the Mukumbi Industries brand normally brew about 12 000 litres of marula beverages for the thirsty crowds. Other marula products are also sold such as nuts, body lotions, jam, cooking oil and soap. The Mapungubwe Festival is growing in stature every year. In addition to popular musical per formances, crafters have an opportunity to display their crafts and generate good income during the festivities.

Hotels and casinos The 160-room Park Inn by R adisson Polok wane has opened in the provincial capital. Located near the golf course

Game drive, Kruger National Park. Image: SA Tourism and the Peter Mokaba Stadium, the hotel also has conference and event facilities. Tsogo Sun runs the Garden Court Polokwane, which has 180 rooms ranging from executive suites to family rooms. The Protea Hotel group has two hotels in the province. The Protea Hotel Landmark in Polokwane has 80 rooms and six conference venues. Just outside the city is the Protea Hotel Polokwane Ranch Resort where guests can walk with lions. The hotel is on a 1 000-hectare nature conservancy and specialises in weddings. In Mokopane near the Waterberg mountains, the family-run The Park Hotel Mokopane has 125 rooms and can cater for up to 400 conference delegates. The three-star hotel recently added 25 selfcatering units. The Fusion Boutique Hotel in the provincial capital offers fivestar quality in 30 en-suite rooms and two exclusive suites. Sun International runs the Meropa Casino and Entertainment World near Polokwane. The Khoroni Hotel, Casino and Convention Resort is in Thohoyandou. A three-star Peermont Metcourt Hotel is in the same complex. The newest casino licence was awarded to Peermont Global Resorts for the official launch and operation of the Thaba Moshate Casino, Hotel and Conference Centre in the Greater Tubatse Local Munici-pality. There are 237 limited pay-out gambling machines in the province, and licences of one sort or another generate more than R50-million for the provincial government. â&#x2013;