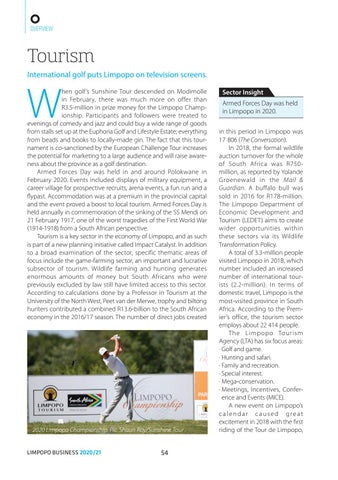 hen golf’s Sunshine Tour descended on Modimolle in February, there was much more on offer than R3.5-million in prize money for the Limpopo Championship. Participants and followers were treated to evenings of comedy and jazz and could buy a wide range of goods from stalls set up at the Euphoria Golf and Lifestyle Estate; everything from beads and books to locally-made gin. The fact that this tournament is co-sanctioned by the European Challenge Tour increases the potential for marketing to a large audience and will raise awareness about the province as a golf destination. Armed Forces Day was held in and around Polokwane in February 2020. Events included displays of military equipment, a career village for prospective recruits, arena events, a fun run and a flypast. Accommodation was at a premium in the provincial capital and the event proved a boost to local tourism. Armed Forces Day is held annually in commemoration of the sinking of the SS Mendi on 21 February 1917, one of the worst tragedies of the First World War (1914-1918) from a South African perspective. Tourism is a key sector in the economy of Limpopo, and as such is part of a new planning initiative called Impact Catalyst. In addition to a broad examination of the sector, specific thematic areas of focus include the game-farming sector, an important and lucrative subsector of tourism. Wildlife farming and hunting generates enormous amounts of money but South Africans who were previously excluded by law still have limited access to this sector. According to calculations done by a Professor in Tourism at the University of the North West, Peet van der Merwe, trophy and biltong hunters contributed a combined R13.6-billion to the South African economy in the 2016/17 season. The number of direct jobs created

Sector Insight Armed Forces Day was held in Limpopo in 2020. in this period in Limpopo was 17 806 (The Conversation). In 2018, the formal wildlife auction turnover for the whole of South Africa was R750million, as reported by Yolande Groenewald in the Mail & Guardian. A buffalo bull was sold in 2016 for R178-million. The Limpopo Department of Economic Development and Tourism (LEDET) aims to create wider opportunities within these sectors via its Wildlife Transformation Policy. A total of 3.3-million people visited Limpopo in 2018, which number included an increased number of international tourists (2.2-million). In terms of domestic travel, Limpopo is the most-visited province in South Africa. According to the Premier’s office, the tourism sector employs about 22 414 people. The Limpopo Tourism Agency (LTA) has six focus areas: · Golf and game. · Hunting and safari. · Family and recreation. · Special interest. · Mega-conservation. · Meetings, Incentives, Conference and Events (MICE). A new event on Limpopo’s calendar caused great excitement in 2018 with the first riding of the Tour de Limpopo,