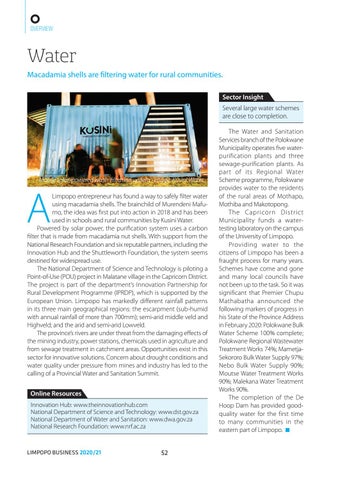 Limpopo entrepreneur has found a way to safely filter water using macadamia shells. The brainchild of Murendeni Mafumo, the idea was first put into action in 2018 and has been used in schools and rural communities by Kusini Water. Powered by solar power, the purification system uses a carbon filter that is made from macadamia nut shells. With support from the National Research Foundation and six reputable partners, including the Innovation Hub and the Shuttleworth Foundation, the system seems destined for widespread use. The National Department of Science and Technology is piloting a Point-of-Use (POU) project in Malatane village in the Capricorn District. The project is part of the department’s Innovation Partnership for Rural Development Programme (IPRDP), which is supported by the European Union. Limpopo has markedly different rainfall patterns in its three main geographical regions: the escarpment (sub-humid with annual rainfall of more than 700mm); semi-arid middle veld and Highveld; and the arid and semi-arid Lowveld. The province’s rivers are under threat from the damaging effects of the mining industry, power stations, chemicals used in agriculture and from sewage treatment in catchment areas. Opportunities exist in this sector for innovative solutions. Concern about drought conditions and water quality under pressure from mines and industry has led to the calling of a Provincial Water and Sanitation Summit.

The Water and Sanitation Services branch of the Polokwane Municipality operates five waterpurification plants and three sewage-purification plants. As part of its Regional Water Scheme programme, Polokwane provides water to the residents of the rural areas of Mothapo, Mothiba and Makotopong. The Capricorn District Municipality funds a watertesting laboratory on the campus of the University of Limpopo. Providing water to the citizens of Limpopo has been a fraught process for many years. Schemes have come and gone and many local councils have not been up to the task. So it was significant that Premier Chupu Mathabatha announced the following markers of progress in his State of the Province Address in February 2020: Polokwane Bulk Water Scheme 100% complete; Polokwane Regional Wastewater Treatment Works 74%; MametjaSekororo Bulk Water Supply 97%; Nebo Bulk Water Supply 90%; Moutse Water Treatment Works 90%; Malekana Water Treatment Works 90%. The completion of the De Hoop Dam has provided goodquality water for the first time to many communities in the eastern part of Limpopo. ■