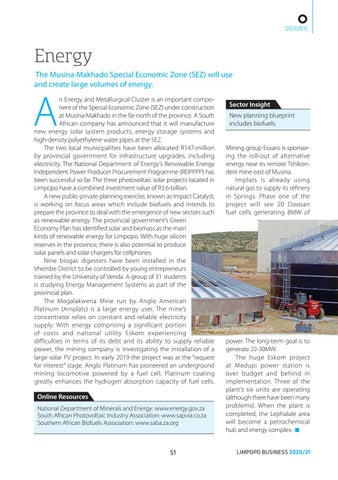 Energy The Musina-Makhado Special Economic Zone (SEZ) will use and create large volumes of energy.

n Energy and Metallurgical Cluster is an important compoSector Insight nent of the Special Economic Zone (SEZ) under construction New planning blueprint at Musina-Makhado in the far north of the province. A South includes biofuels. African company has announced that it will manufacture new energy solar system products, energy storage systems and high-density polyethylene water pipes at the SEZ. The two local municipalities have been allocated R147-million Mining group Exxaro is sponsorby provincial government for infrastructure upgrades, including ing the roll-out of alternative electricity. The National Department of Energy’s Renewable Energy energy near its remote TshikonIndependent Power Producer Procurement Programme (REIPPPP) has deni mine east of Musina. been successful so far. The three photovoltaic solar projects located in Implats is already using Limpopo have a combined investment value of R3.6-billion. natural gas to supply its refinery A new public-private planning exercise, known as Impact Catalyst, in Springs. Phase one of the is working on focus areas which include biofuels and intends to project will see 20 Doosan prepare the province to deal with the emergence of new sectors such fuel cells generating 8MW of as renewable energy. The provincial government’s Green Economy Plan has identified solar and biomass as the main kinds of renewable energy for Limpopo. With huge silicon reserves in the province, there is also potential to produce solar panels and solar chargers for cellphones. Nine biogas digesters have been installed in the Vhembe District to be controlled by young entrepreneurs trained by the University of Venda. A group of 31 students is studying Energy Management Systems as part of the provincial plan. The Mogalakwena Mine run by Anglo American Platinum (Amplats) is a large energy user. The mine’s concentrator relies on constant and reliable electricity supply. With energy comprising a significant portion Rural digester. Image: BiogasSA of costs and national utility Eskom experiencing difficulties in terms of its debt and its ability to supply reliable power. The long-term goal is to power, the mining company is investigating the installation of a generate 22-30MW. large solar PV project. In early 2019 the project was at the “request The huge Eskom project for interest” stage. Anglo Platinum has pioneered an underground at Medupi power station is mining locomotive powered by a fuel cell. Platinum coating over budget and behind in greatly enhances the hydrogen absorption capacity of fuel cells. implementation. Three of the plant’s six units are operating Online Resources (although there have been many problems). When the plant is National Department of Minerals and Energy: www.energy.gov.za completed, the Lephalale area South African Photovoltaic Industry Association: www.sapvia.co.za will become a petrochemical Southern African Biofuels Association: www.saba.za.org hub and energy complex. ■