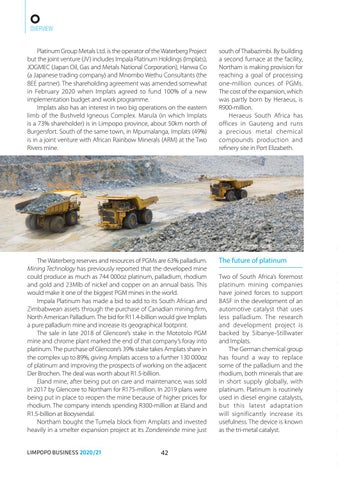 OVERVIEW Platinum Group Metals Ltd. is the operator of the Waterberg Project but the joint venture (JV) includes Impala Platinum Holdings (Implats), JOGMEC (Japan Oil, Gas and Metals National Corporation), Hanwa Co (a Japanese trading company) and Mnombo Wethu Consultants (the BEE partner). The shareholding agreement was amended somewhat in February 2020 when Implats agreed to fund 100% of a new implementation budget and work programme. Implats also has an interest in two big operations on the eastern limb of the Bushveld Igneous Complex. Marula (in which Implats is a 73% shareholder) is in Limpopo province, about 50km north of Burgersfort. South of the same town, in Mpumalanga, Implats (49%) is in a joint venture with African Rainbow Minerals (ARM) at the Two Rivers mine.

south of Thabazimbi. By building a second furnace at the facility, Northam is making provision for reaching a goal of processing one-million ounces of PGMs. The cost of the expansion, which was partly born by Heraeus, is R900-million. Heraeus South Africa has offices in Gauteng and runs a precious metal chemical compounds production and refinery site in Port Elizabeth.

Image: Anglo American The Waterberg reserves and resources of PGMs are 63% palladium. Mining Technology has previously reported that the developed mine could produce as much as 744 000oz platinum, palladium, rhodium and gold and 23Mlb of nickel and copper on an annual basis. This would make it one of the biggest PGM mines in the world. Impala Platinum has made a bid to add to its South African and Zimbabwean assets through the purchase of Canadian mining firm, North American Palladium. The bid for R11.4-billion would give Implats a pure palladium mine and increase its geographical footprint. The sale in late 2018 of Glencore’s stake in the Mototolo PGM mine and chrome plant marked the end of that company’s foray into platinum. The purchase of Glencore’s 39% stake takes Amplats share in the complex up to 89%, giving Amplats access to a further 130 000oz of platinum and improving the prospects of working on the adjacent Der Brochen. The deal was worth about R1.5-billion. Eland mine, after being put on care and maintenance, was sold in 2017 by Glencore to Northam for R175-million. In 2019 plans were being put in place to reopen the mine because of higher prices for rhodium. The company intends spending R300-million at Eland and R1.5-billion at Booysendal. Northam bought the Tumela block from Amplats and invested heavily in a smelter expansion project at its Zondereinde mine just LIMPOPO BUSINESS 2020/21

The future of platinum Two of South Africa’s foremost platinum mining companies have joined forces to support BASF in the development of an automotive catalyst that uses less palladium. The research and development project is backed by Sibanye-Stillwater and Implats. The German chemical group has found a way to replace some of the palladium and the rhodium, both minerals that are in short supply globally, with platinum. Platinum is routinely used in diesel engine catalysts, but this latest adaptation will significantly increase its usefulness. The device is known as the tri-metal catalyst.