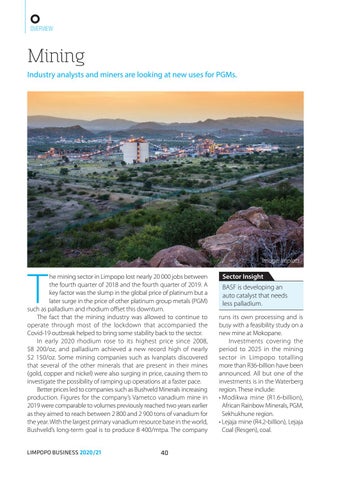 Mining Industry analysts and miners are looking at new uses for PGMs.

he mining sector in Limpopo lost nearly 20 000 jobs between the fourth quarter of 2018 and the fourth quarter of 2019. A key factor was the slump in the global price of platinum but a later surge in the price of other platinum group metals (PGM) such as palladium and rhodium offset this downturn. The fact that the mining industry was allowed to continue to operate through most of the lockdown that accompanied the Covid-19 outbreak helped to bring some stability back to the sector. In early 2020 rhodium rose to its highest price since 2008, $8 200/oz, and palladium achieved a new record high of nearly $2 150/oz. Some mining companies such as Ivanplats discovered that several of the other minerals that are present in their mines (gold, copper and nickel) were also surging in price, causing them to investigate the possibility of ramping up operations at a faster pace. Better prices led to companies such as Bushveld Minerals increasing production. Figures for the company’s Vametco vanadium mine in 2019 were comparable to volumes previously reached two years earlier as they aimed to reach between 2 800 and 2 900 tons of vanadium for the year. With the largest primary vanadium resource base in the world, Bushveld’s long-term goal is to produce 8 400/mtpa. The company LIMPOPO BUSINESS 2020/21

Sector Insight BASF is developing an auto catalyst that needs less palladium. runs its own processing and is busy with a feasibility study on a new mine at Mokopane. Investments covering the period to 2025 in the mining sector in Limpopo totalling more than R36-billion have been announced. All but one of the investments is in the Waterberg region. These include: • Modikwa mine (R1.6-billion), African Rainbow Minerals, PGM, Sekhukhune region. • Lejaja mine (R4.2-billion), Lejaja Coal (Resgen), coal.