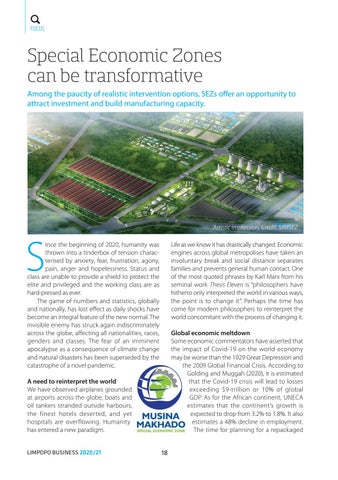 Special Economic Zones can be transformative Among the paucity of realistic intervention options, SEZs offer an opportunity to attract investment and build manufacturing capacity.

ince the beginning of 2020, humanity was thrown into a tinderbox of tension characterised by anxiety, fear, frustration, agony, pain, anger and hopelessness. Status and class are unable to provide a shield to protect the elite and privileged and the working class are as hard-pressed as ever. The game of numbers and statistics, globally and nationally, has lost effect as daily shocks have become an integral feature of the new normal. The invisible enemy has struck again indiscriminately across the globe, affecting all nationalities, races, genders and classes. The fear of an imminent apocalypse as a consequence of climate change and natural disasters has been superseded by the catastrophe of a novel pandemic.

Life as we know it has drastically changed. Economic engines across global metropolises have taken an involuntary break and social distance separates families and prevents general human contact. One of the most quoted phrases by Karl Marx from his seminal work Thesis Eleven is â&#x20AC;&#x153;philosophers have hitherto only interpreted the world in various ways, the point is to change itâ&#x20AC;?. Perhaps the time has come for modern philosophers to reinterpret the world concomitant with the process of changing it. Global economic meltdown Some economic commentators have asserted that the impact of Covid-19 on the world economy may be worse than the 1929 Great Depression and the 2009 Global Financial Crisis. According to Golding and Muggah (2020), it is estimated that the Covid-19 crisis will lead to losses exceeding $9-trillion or 10% of global GDP. As for the African continent, UNECA estimates that the continentâ&#x20AC;&#x2122;s growth is expected to drop from 3.2% to 1.8%. It also estimates a 48% decline in employment. The time for planning for a repackaged

A need to reinterpret the world We have observed airplanes grounded at airports across the globe, boats and oil tankers stranded outside harbours, the finest hotels deserted, and yet hospitals are overflowing. Humanity has entered a new paradigm. LIMPOPO BUSINESS 2020/21