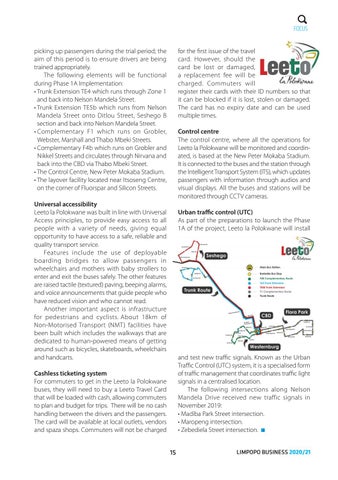 for the first issue of the travel card. However, should the card be lost or damaged, a replacement fee will be charged. Commuters will register their cards with their ID numbers so that it can be blocked if it is lost, stolen or damaged. The card has no expiry date and can be used multiple times. Control centre The control centre, where all the operations for Leeto la Polokwane will be monitored and coordinated, is based at the New Peter Mokaba Stadium. It is connected to the buses and the station through the Intelligent Transport System (ITS), which updates passengers with information through audios and visual displays. All the buses and stations will be monitored through CCTV cameras.

Universal accessibility Leeto la Polokwane was built in line with Universal Access principles, to provide easy access to all people with a variety of needs, giving equal opportunity to have access to a safe, reliable and quality transport service. Features include the use of deployable boarding bridges to allow passengers in wheelchairs and mothers with baby strollers to enter and exit the buses safely. The other features are raised tactile (textured) paving, beeping alarms, and voice announcements that guide people who have reduced vision and who cannot read. Another important aspect is infrastructure for pedestrians and cyclists. About 18km of Non-Motorised Transport (NMT ) facilities have been built which includes the walkways that are dedicated to human-powered means of getting around such as bicycles, skateboards, wheelchairs and handcarts.

Urban traffic control (UTC) As part of the preparations to launch the Phase 1A of the project, Leeto la Polokwane will install

Cashless ticketing system For commuters to get in the Leeto la Polokwane buses, they will need to buy a Leeto Travel Card that will be loaded with cash, allowing commuters to plan and budget for trips. There will be no cash handling between the drivers and the passengers. The card will be available at local outlets, vendors and spaza shops. Commuters will not be charged