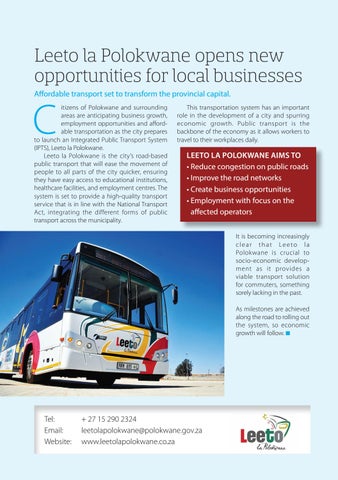 itizens of Polokwane and surrounding areas are anticipating business growth, employment opportunities and affordable transportation as the city prepares to launch an Integrated Public Transport System (IPTS), Leeto la Polokwane. Leeto la Polokwane is the city’s road-based public transport that will ease the movement of people to all parts of the city quicker, ensuring they have easy access to educational institutions, healthcare facilities, and employment centres. The system is set to provide a high-quality transport service that is in line with the National Transport Act, integrating the different forms of public transport across the municipality.

This transportation system has an important role in the development of a city and spurring economic growth. Public transport is the backbone of the economy as it allows workers to travel to their workplaces daily.

LEETO LA POLOKWANE AIMS TO • Reduce congestion on public roads • Improve the road networks • Create business opportunities • Employment with focus on the affected operators It is becoming increasingly clear that Leeto la Polokwane is crucial to socio-economic development as it provides a viable transport solution for commuters, something sorely lacking in the past. As milestones are achieved along the road to rolling out the system, so economic growth will follow. ■