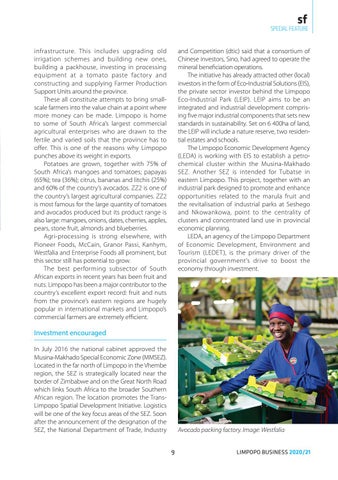 SPECIAL FEATURE infrastructure. This includes upgrading old irrigation schemes and building new ones, building a packhouse, investing in processing equipment at a tomato paste factory and constructing and supplying Farmer Production Support Units around the province. These all constitute attempts to bring smallscale farmers into the value chain at a point where more money can be made. Limpopo is home to some of South Africa’s largest commercial agricultural enterprises who are drawn to the fertile and varied soils that the province has to offer. This is one of the reasons why Limpopo punches above its weight in exports. Potatoes are grown, together with 75% of South Africa’s mangoes and tomatoes; papayas (65%); tea (36%); citrus, bananas and litchis (25%) and 60% of the country’s avocados. ZZ2 is one of the country’s largest agricultural companies. ZZ2 is most famous for the large quantity of tomatoes and avocados produced but its product range is also large: mangoes, onions, dates, cherries, apples, pears, stone fruit, almonds and blueberries. Agri-processing is strong elsewhere, with Pioneer Foods, McCain, Granor Passi, Kanhym, Westfalia and Enterprise Foods all prominent, but this sector still has potential to grow. The best performing subsector of South African exports in recent years has been fruit and nuts. Limpopo has been a major contributor to the country’s excellent export record: fruit and nuts from the province’s eastern regions are hugely popular in international markets and Limpopo’s commercial farmers are extremely efficient.

and Competition (dtic) said that a consortium of Chinese investors, Sino, had agreed to operate the mineral beneficiation operations. The initiative has already attracted other (local) investors in the form of Eco-Industrial Solutions (EIS), the private sector investor behind the Limpopo Eco-Industrial Park (LEIP). LEIP aims to be an integrated and industrial development comprising five major industrial components that sets new standards in sustainability. Set on 6 400ha of land, the LEIP will include a nature reserve, two residential estates and schools. The Limpopo Economic Development Agency (LEDA) is working with EIS to establish a petrochemical cluster within the Musina-Makhado SEZ. Another SEZ is intended for Tubatse in eastern Limpopo. This project, together with an industrial park designed to promote and enhance opportunities related to the marula fruit and the revitalisation of industrial parks at Seshego and Nkowankowa, point to the centrality of clusters and concentrated land use in provincial economic planning. LEDA, an agency of the Limpopo Department of Economic Development, Environment and Tourism  (LEDET ), is the primary driver of the provincial government’s drive to boost the economy through investment.

Investment encouraged In July 2016 the national cabinet approved the Musina-Makhado Special Economic Zone (MMSEZ). Located in the far north of Limpopo in the Vhembe region, the SEZ is strategically located near the border of Zimbabwe and on the Great North Road which links South Africa to the broader Southern African region. The location promotes the TransLimpopo Spatial Development Initiative. Logistics will be one of the key focus areas of the SEZ. Soon after the announcement of the designation of the SEZ, the National Department of Trade, Industry