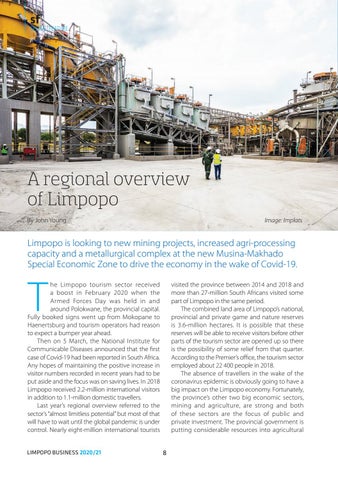 A regional overview of Limpopo By John Young

Limpopo is looking to new mining projects, increased agri-processing capacity and a metallurgical complex at the new Musina-Makhado Special Economic Zone to drive the economy in the wake of Covid-19.

he Limpopo tourism sector received a boost in February 2020 when the Armed Forces Day was held in and around Polokwane, the provincial capital. Fully booked signs went up from Mokopane to Haenertsburg and tourism operators had reason to expect a bumper year ahead. Then on 5 March, the National Institute for Communicable Diseases announced that the first case of Covid-19 had been reported in South Africa. Any hopes of maintaining the positive increase in visitor numbers recorded in recent years had to be put aside and the focus was on saving lives. In 2018 Limpopo received 2.2-million international visitors in addition to 1.1-million domestic travellers. Last year’s regional overview referred to the sector’s “almost limitless potential” but most of that will have to wait until the global pandemic is under control. Nearly eight-million international tourists LIMPOPO BUSINESS 2020/21

visited the province between 2014 and 2018 and more than 27-million South Africans visited some part of Limpopo in the same period. The combined land area of Limpopo’s national, provincial and private game and nature reserves is 3.6-million hectares. It is possible that these reserves will be able to receive visitors before other parts of the tourism sector are opened up so there is the possibility of some relief from that quarter. According to the Premier’s office, the tourism sector employed about 22 400 people in 2018. The absence of travellers in the wake of the coronavirus epidemic is obviously going to have a big impact on the Limpopo economy. Fortunately, the province’s other two big economic sectors, mining and agriculture, are strong and both of these sectors are the focus of public and private investment. The provincial government is putting considerable resources into agricultural