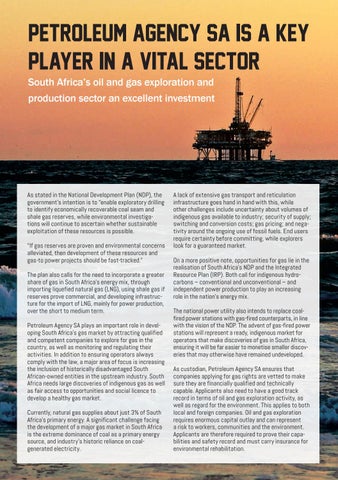 As stated in the National Development Plan (NDP), the government’s intention is to “enable exploratory drilling to identify economically recoverable coal seam and shale gas reserves, while environmental investigations will continue to ascertain whether sustainable exploitation of these resources is possible. “If gas reserves are proven and environmental concerns alleviated, then development of these resources and gas-to power projects should be fast-tracked.” The plan also calls for the need to incorporate a greater share of gas in South Africa’s energy mix, through importing liquefied natural gas (LNG), using shale gas if reserves prove commercial, and developing infrastructure for the import of LNG, mainly for power production, over the short to medium term. Petroleum Agency SA plays an important role in developing South Africa’s gas market by attracting qualified and competent companies to explore for gas in the country, as well as monitoring and regulating their activities. In addition to ensuring operators always comply with the law, a major area of focus is increasing the inclusion of historically disadvantaged South African-owned entities in the upstream industry. South Africa needs large discoveries of indigenous gas as well as fair access to opportunities and social licence to develop a healthy gas market. Currently, natural gas supplies about just 3% of South Africa’s primary energy. A significant challenge facing the development of a major gas market in South Africa is the extreme dominance of coal as a primary energy source, and industry’s historic reliance on coalgenerated electricity.

A lack of extensive gas transport and reticulation infrastructure goes hand in hand with this, while other challenges include uncertainty about volumes of indigenous gas available to industry; security of supply; switching and conversion costs; gas pricing; and negativity around the ongoing use of fossil fuels. End users require certainty before committing, while explorers look for a guaranteed market. On a more positive note, opportunities for gas lie in the realisation of South Africa’s NDP and the Integrated Resource Plan (IRP). Both call for indigenous hydrocarbons – conventional and unconventional – and independent power production to play an increasing role in the nation’s energy mix. The national power utility also intends to replace coalfired power stations with gas-fired counterparts, in line with the vision of the NDP. The advent of gas-fired power stations will represent a ready, indigenous market for operators that make discoveries of gas in South Africa, ensuring it will be far easier to monetise smaller discoveries that may otherwise have remained undeveloped. As custodian, Petroleum Agency SA ensures that companies applying for gas rights are vetted to make sure they are financially qualified and technically capable. Applicants also need to have a good track record in terms of oil and gas exploration activity, as well as regard for the environment. This applies to both local and foreign companies. Oil and gas exploration requires enormous capital outlay and can represent a risk to workers, communities and the environment. Applicants are therefore required to prove their capabilities and safety record and must carry insurance for environmental rehabilitation.