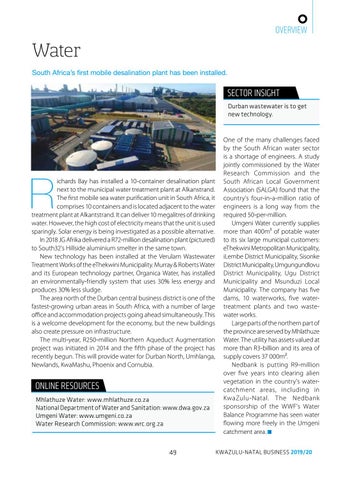 SECTOR INSIGHT Durban wastewater is to get new technology.

ichards Bay has installed a 10-container desalination plant next to the municipal water treatment plant at Alkanstrand. The first mobile sea water purification unit in South Africa, it comprises 10 containers and is located adjacent to the water treatment plant at Alkantstrand. It can deliver 10 megalitres of drinking water. However, the high cost of electricity means that the unit is used sparingly. Solar energy is being investigated as a possible alternative. In 2018 JG Afrika delivered a R72-million desalination plant (pictured) to South32's Hillside aluminium smelter in the same town. New technology has been installed at the Verulam Wastewater Treatment Works of the eThekwini Municipality. Murray & Roberts Water and its European technology partner, Organica Water, has installed an environmentally-friendly system that uses 30% less energy and produces 30% less sludge. The area north of the Durban central business district is one of the fastest-growing urban areas in South Africa, with a number of large office and accommodation projects going ahead simultaneously. This is a welcome development for the economy, but the new buildings also create pressure on infrastructure. The multi-year, R250-million Northern Aqueduct Augmentation project was initiated in 2014 and the fifth phase of the project has recently begun. This will provide water for Durban North, Umhlanga, Newlands, KwaMashu, Phoenix and Cornubia.

One of the many challenges faced by the South African water sector is a shortage of engineers. A study jointly commissioned by the Water Research Commission and the South African Local Government Association (SALGA) found that the country's four-in-a-million ratio of engineers is a long way from the required 50-per-million. Umgeni Water currently supplies more than 400m³ of potable water to its six large municipal customers: eThekwini Metropolitan Municipality, iLembe District Municipality, Sisonke District Municipality, Umgungundlovu District Municipality, Ugu District Municipality and Msunduzi Local Municipality. The company has five dams, 10 waterworks, five watertreatment plants and two wastewater works. Large parts of the northern part of the province are served by Mhlathuze Water. The utility has assets valued at more than R3-billion and its area of supply covers 37 000m². Nedbank is putting R9-million over five years into clearing alien vegetation in the country's watercatchment areas, including in KwaZulu-Natal. The Nedbank sponsorship of the WWF's Water Balance Programme has seen water flowing more freely in the Umgeni catchment area. KWAZULU-NATAL BUSINESS 2019/20