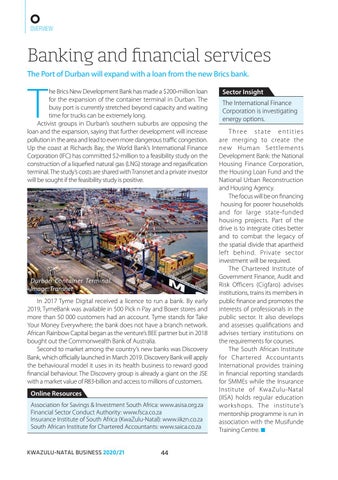 Banking and financial services The Port of Durban will expand with a loan from the new Brics bank.

he Brics New Development Bank has made a $200-million loan for the expansion of the container terminal in Durban. The busy port is currently stretched beyond capacity and waiting time for trucks can be extremely long. Activist groups in Durban’s southern suburbs are opposing the loan and the expansion, saying that further development will increase pollution in the area and lead to even more dangerous traffic congestion. Up the coast at Richards Bay, the World Bank’s International Finance Corporation (IFC) has committed $2-million to a feasibility study on the construction of a liquefied natural gas (LNG) storage and regasification terminal. The study’s costs are shared with Transnet and a private investor will be sought if the feasibility study is positive.

Durban Container Terminal. Image: Transnet In 2017 Tyme Digital received a licence to run a bank. By early 2019, TymeBank was available in 500 Pick n Pay and Boxer stores and more than 50 000 customers had an account. Tyme stands for Take Your Money Everywhere; the bank does not have a branch network. African Rainbow Capital began as the venture’s BEE partner but in 2018 bought out the Commonwealth Bank of Australia. Second to market among the country’s new banks was Discovery Bank, which officially launched in March 2019. Discovery Bank will apply the behavioural model it uses in its health business to reward good financial behaviour. The Discovery group is already a giant on the JSE with a market value of R83-billion and access to millions of customers.

Sector Insight The International Finance Corporation is investigating energy options. Three state entities are merging to create the new Human Settlements Development Bank: the National Housing Finance Corporation, the Housing Loan Fund and the National Urban Reconstruction and Housing Agency. The focus will be on financing housing for poorer households and for large state-funded housing projects. Part of the drive is to integrate cities better and to combat the legacy of the spatial divide that apartheid left behind. Private sector investment will be required. The Chartered Institute of Government Finance, Audit and Risk Officers (Cigfaro) advises institutions, trains its members in public finance and promotes the interests of professionals in the public sector. It also develops and assesses qualifications and advises tertiary institutions on the requirements for courses. The South African Institute for Chartered Accountants International provides training in financial reporting standards for SMMEs while the Insurance Institute of KwaZulu-Natal (IISA) holds regular education workshops. The institute’s mentorship programme is run in association with the Musifunde Training Centre. ■