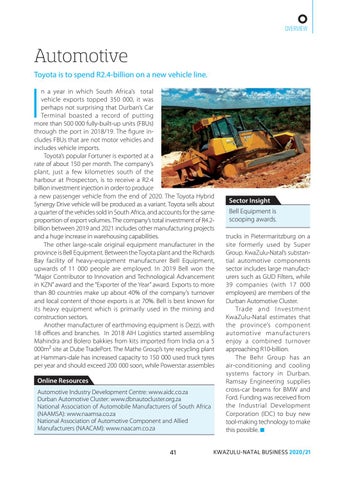 Automotive Toyota is to spend R2.4-billion on a new vehicle line.

n a year in which South Africa’s total vehicle exports topped 350 000, it was perhaps not surprising that Durban’s Car Terminal boasted a record of putting more than 500 000 fully-built-up units (FBUs) through the port in 2018/19. The figure includes FBUs that are not motor vehicles and includes vehicle imports. Toyota’s popular Fortuner is exported at a rate of about 150 per month. The company’s plant, just a few kilometres south of the harbour at Prospecton, is to receive a R2.4 billion investment injection in order to produce a new passenger vehicle from the end of 2020. The Toyota Hybrid Synergy Drive vehicle will be produced as a variant. Toyota sells about a quarter of the vehicles sold in South Africa, and accounts for the same proportion of export volumes. The company’s total investment of R4.2billion between 2019 and 2021 includes other manufacturing projects and a huge increase in warehousing capabilities. The other large-scale original equipment manufacturer in the province is Bell Equipment. Between the Toyota plant and the Richards Bay facility of heavy-equipment manufacturer Bell Equipment, upwards of 11 000 people are employed. In 2019 Bell won the “Major Contributor to Innovation and Technological Advancement in KZN” award and the “Exporter of the Year” award. Exports to more than 80 countries make up about 40% of the company’s turnover and local content of those exports is at 70%. Bell is best known for its heavy equipment which is primarily used in the mining and construction sectors. Another manufacturer of earthmoving equipment is Dezzi, with 18 offices and branches. In 2018 AIH Logistics started assembling Mahindra and Bolero bakkies from kits imported from India on a 5 000m² site at Dube TradePort. The Mathe Group’s tyre recycling plant at Hammars-dale has increased capacity to 150 000 used truck tyres per year and should exceed 200 000 soon, while Powerstar assembles

Sector Insight Bell Equipment is scooping awards. trucks in Pietermaritzburg on a site formerly used by Super Group. KwaZulu-Natal’s substantial automotive components sector includes large manufacturers such as GUD Filters, while 39 companies (with 17 000 employees) are members of the Durban Automotive Cluster. Trade and I nvestment KwaZulu-Natal estimates that the province’s component automotive manufacturers enjoy a combined turnover approaching R10-billion. The Behr Group has an air-conditioning and cooling systems factory in Durban. Ramsay Engineering supplies cross-car beams for BMW and Ford. Funding was received from the Industrial Development Corporation (IDC) to buy new tool-making technology to make this possible. ■