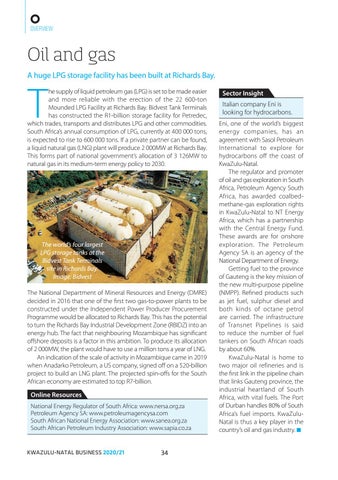 Oil and gas A huge LPG storage facility has been built at Richards Bay.

he supply of liquid petroleum gas (LPG) is set to be made easier and more reliable with the erection of the 22 600-ton Mounded LPG Facility at Richards Bay. Bidvest Tank Terminals has constructed the R1-billion storage facility for Petredec, which trades, transports and distributes LPG and other commodities. South Africa’s annual consumption of LPG, currently at 400 000 tons, is expected to rise to 600 000 tons. If a private partner can be found, a liquid natural gas (LNG) plant will produce 2 000MW at Richards Bay. This forms part of national government’s allocation of 3 126MW to natural gas in its medium-term energy policy to 2030.

The world’s four largest LPG storage tanks at the Bidvest Tank Terminals site in Richards Bay. Image: Bidvest The National Department of Mineral Resources and Energy (DMRE) decided in 2016 that one of the first two gas-to-power plants to be constructed under the Independent Power Producer Procurement Programme would be allocated to Richards Bay. This has the potential to turn the Richards Bay Industrial Development Zone (RBIDZ) into an energy hub. The fact that neighbouring Mozambique has significant offshore deposits is a factor in this ambition. To produce its allocation of 2 000MW, the plant would have to use a million tons a year of LNG. An indication of the scale of activity in Mozambique came in 2019 when Anadarko Petroleum, a US company, signed off on a $20-billion project to build an LNG plant. The projected spin-offs for the South African economy are estimated to top R7-billion.

Sector Insight Italian company Eni is looking for hydrocarbons. Eni, one of the world’s biggest energy companies, has an agreement with Sasol Petroleum International to explore for hydrocarbons off the coast of KwaZulu-Natal. The regulator and promoter of oil and gas exploration in South Africa, Petroleum Agency South Africa, has awarded coalbedmethane-gas exploration rights in KwaZulu-Natal to NT Energy Africa, which has a partnership with the Central Energy Fund. These awards are for onshore exploration. The Petroleum Agency SA is an agency of the National Department of Energy. Getting fuel to the province of Gauteng is the key mission of the new multi-purpose pipeline (NMPP). Refined products such as jet fuel, sulphur diesel and both kinds of octane petrol are carried. The infrastructure of Transnet Pipelines is said to reduce the number of fuel tankers on South African roads by about 60%. KwaZulu-Natal is home to two major oil refineries and is the first link in the pipeline chain that links Gauteng province, the industrial heartland of South Africa, with vital fuels. The Port of Durban handles 80% of South Africa’s fuel imports. KwaZuluNatal is thus a key player in the country’s oil and gas industry. ■