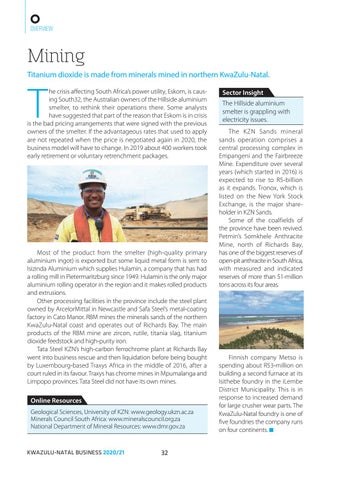 Mining Titanium dioxide is made from minerals mined in northern KwaZulu-Natal.

he crisis affecting South Africa’s power utility, Eskom, is causing South32, the Australian owners of the Hillside aluminium smelter, to rethink their operations there. Some analysts have suggested that part of the reason that Eskom is in crisis is the bad pricing arrangements that were signed with the previous owners of the smelter. If the advantageous rates that used to apply are not repeated when the price is negotiated again in 2020, the business model will have to change. In 2019 about 400 workers took early retirement or voluntary retrenchment packages.

Images: RBM Mines Most of the product from the smelter (high-quality primary aluminium ingot) is exported but some liquid metal form is sent to Isizinda Aluminium which supplies Hulamin, a company that has had a rolling mill in Pietermaritzburg since 1949. Hulamin is the only major aluminium rolling operator in the region and it makes rolled products and extrusions. Other processing facilities in the province include the steel plant owned by ArcelorMittal in Newcastle and Safa Steel’s metal-coating factory in Cato Manor. RBM mines the minerals sands of the northern KwaZulu-Natal coast and operates out of Richards Bay. The main products of the RBM mine are zircon, rutile, titania slag, titanium dioxide feedstock and high-purity iron. Tata Steel KZN’s high-carbon ferrochrome plant at Richards Bay went into business rescue and then liquidation before being bought by Luxembourg-based Traxys Africa in the middle of 2016, after a court ruled in its favour. Traxys has chrome mines in Mpumalanga and Limpopo provinces. Tata Steel did not have its own mines.

Sector Insight The Hillside aluminium smelter is grappling with electricity issues. The KZN Sands mineral sands operation comprises a central processing complex in Empangeni and the Fairbreeze Mine. Expenditure over several years (which started in 2016) is expected to rise to R5-billion as it expands. Tronox, which is listed on the New York Stock Exchange, is the major shareholder in KZN Sands. Some of the coalfields of the province have been revived. Petmin’s Somkhele Anthracite Mine, north of Richards Bay, has one of the biggest reserves of open-pit anthracite in South Africa, with measured and indicated reserves of more than 51-million tons across its four areas.

Finnish company Metso is spending about R53-million on building a second furnace at its Isithebe foundry in the iLembe District Municipality. This is in response to increased demand for large crusher wear parts. The KwaZulu-Natal foundry is one of five foundries the company runs on four continents. ■