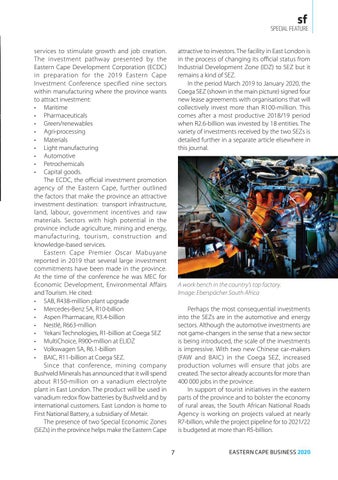 SPECIAL FEATURE attractive to investors. The facility in East London is in the process of changing its official status from Industrial Development Zone (IDZ) to SEZ but it remains a kind of SEZ. In the period March 2019 to January 2020, the Coega SEZ (shown in the main picture) signed four new lease agreements with organisations that will collectively invest more than R100-million. This comes after a most productive 2018/19 period when R2.6-billion was invested by 18 entities. The variety of investments received by the two SEZs is detailed further in a separate article elsewhere in this journal.

services to stimulate growth and job creation. The investment pathway presented by the Eastern Cape Development Corporation (ECDC) in preparation for the 2019 Eastern Cape Investment Conference specified nine sectors within manufacturing where the province wants to attract investment: • Maritime • Pharmaceuticals • Green/renewables • Agri-processing • Materials • Light manufacturing • Automotive • Petrochemicals • Capital goods. The ECDC, the official investment promotion agency of the Eastern Cape, further outlined the factors that make the province an attractive investment destination: transport infrastructure, land, labour, government incentives and raw materials. Sectors with high potential in the province include agriculture, mining and energy, manufacturing, tourism, construction and knowledge-based services. Eastern Cape Premier Oscar Mabuyane reported in 2019 that several large investment commitments have been made in the province. At the time of the conference he was MEC for Economic Development, Environmental Affairs and Tourism. He cited: • SAB, R438-million plant upgrade • Mercedes-Benz SA, R10-billion • Aspen Pharmacare, R3.4-billion • Nestlé, R663-million • Yekani Technologies, R1-billion at Coega SEZ • MultiChoice, R900-million at ELIDZ • Volkswagen SA, R6.1-billion • BAIC, R11-billion at Coega SEZ. Since that conference, mining company Bushveld Minerals has announced that it will spend about R150-million on a vanadium electrolyte plant in East London. The product will be used in vanadium redox flow batteries by Bushveld and by international customers. East London is home to First National Battery, a subsidiary of Metair. The presence of two Special Economic Zones (SEZs) in the province helps make the Eastern Cape

A work bench in the country’s top factory. Image: Eberspächer South Africa Perhaps the most consequential investments into the SEZs are in the automotive and energy sectors. Although the automotive investments are not game-changers in the sense that a new sector is being introduced, the scale of the investments is impressive. With two new Chinese car-makers (FAW and BAIC) in the Coega SEZ, increased production volumes will ensure that jobs are created. The sector already accounts for more than 400 000 jobs in the province. In support of tourist initiatives in the eastern parts of the province and to bolster the economy of rural areas, the South African National Roads Agency is working on projects valued at nearly R7-billion, while the project pipeline for to 2021/22 is budgeted at more than R5-billion.